How did the UK General Election look from a social media perspective? If you live in the UK, your memories of the general election campaign are likely part fuelled by social media:  posts about an English teacher marking a UKIP flyer, a Vine video of Ed Miliband set to Careless Whisper or voting advice from Russell Brand.

According to our BuzzSumo data there were at least 60,000 pieces of content (blog posts, news articles, videos) about the election shared on social media in the period immediately prior to the election (1st March 2015 to 7th May 2015). The top 10,000 posts were shared over 20 million times. So even if you missed the posts above, it is likely that your social media feed contained articles about the UK election.

So what worked? We analysed the top 10,000 most shared pieces of election content (not the content of tweets but web content that was shared via social media) and draw out some lessons for politicians on getting their messages shared on social media.

The Most Shared Posts Were Negative

Negative content included articles that focused on the impact of policies, such as the one below, shared over 112,000 times.

However, much of the most shared content was mocking (or comic, depending on your perspective), particularly focused on Ed Miliband. One Vine video was shared over 70,000 times and viewed or looped over 3m times. BuzzFeed joined in the mockery with a post “18 Photos of Ed Miliband Vastly Improved by Alan Partridge Quotes: Back of the Net” which was shared over 25,000 times. 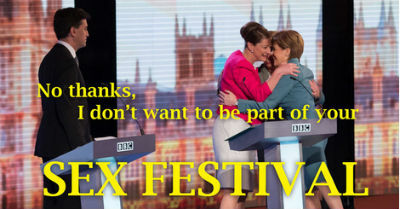 Articles about the election were shared far more on Facebook than any other social network. However, Vine videos were shared widely as we noted above. The Vine below “Ed Miliband Careless Whisper” was shared over 46,000 times and referenced on various TV channels.

Stories about the UK election on sites such as BuzzFeed and Huffington Post got as many social shares, and often more, than content published by traditional UK newspapers. Newer online publishers played a much more significant role in shaping the discussions and debate than in previous elections. Their content is just as likely to find its way into a social media feed as the traditional publishers.

A Huffington Post article “Ten reasons to vote UKIP” by Steven Woolfe was published just the day before the election but was one of the most shared positive election posts with over 24,000 likes and shares. This was slightly more than George Monbiot’s post on the issues that really matter published in the Guardian the day before. To put this into context George is one of the top 5 most shared authors on the Guardian with a typical post averaging 18,000 shares.

This article on Time about Nicola Sturgeon being the biggest winner of the campaign was published in the week of the election and was also shared over 22,000 times.

UK newspapers leveraged their own audiences to share content that was favourable to their chosen political party and to distribute content that shaped the election narrative. Their share numbers were similar to those of sites such as Time and Huffington Post, for example these posts by the Observer and the Daily Mail in support of Labour and the Conservatives each had just over 20,000 shares.

There were a few exceptions. The Sunday Express achieved a higher level of shares, just over 30,000, for its backing of UKIP. This is consistent with any content about UKIP getting more social shares, as we will explore more below.

The Daily Telegraph’s most shared article of the entire election period was a surprise. Despite being supportive of the Conservatives overall the paper was critical of their policy on extending Right to Buy. Their article criticising the Conservative’s policy was the Telegraph’s most shared election post, it amassed almost 40,000 shares. This may have been because it leveraged not only some of its own audience but those who were opposed to the Conservatives and hence who would not normally share its content.

Some of the most shared positive articles were celebrity endorsements, often posted on the sites of larger publishers. These leveraged both of their existing audiences though not to the degree you might expect.

This article by Robert Webb supporting Ed Miliband on the New Statesman site had over 40,000 shares.

Stephen Hawking’s endorsement of Labour in the Independent was shared almost 28,000 times.

The most shared celebrity endorsement was Russell Brand’s video encouraging people to vote after many months of telling them not to vote. David Cameron called him a joke during the election, though you can’t laugh at 76k shares of his video.

Failure by Political Parties to Leverage Audiences, Except UKIP

The following chart shows the average shares of all posts published by Political Parties on their own sites from 1st March 2015 to 7th May 2015. 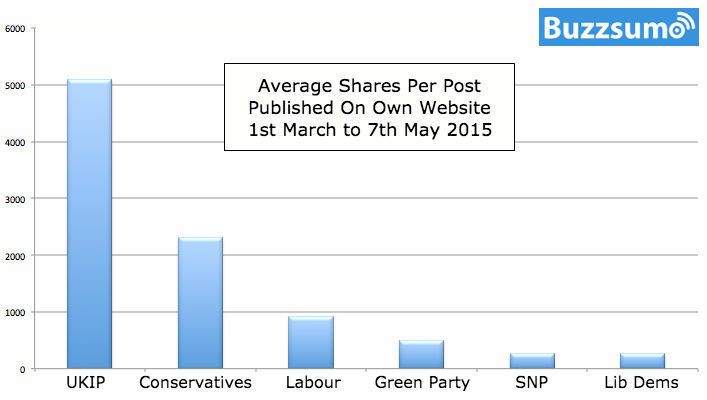 UKIP were exceptional in getting each of their posts shared over 5,000 times on average. There was no relationship between the number of shares and the size of a Party’s political membership. UKIP have around a quarter of the members of the Labour Party but achieved significantly higher social shares. In the case of the Lib Dems their average post was shared by less than 1% of their own members i.e. under 400 people, very often by less 200 people. If a political party’s own members are not willing to share their content, it begs the question why would anyone else share it?

This post on the launch of the Lib Dem manifesto had less than 200 shares.

This post was tweeted just 78 times. Looking at the people who shared this post using BuzzSumo we can see that former MP Julian Huppert and Baroness Hussein-Ece shared the post on Twitter. However, their lead was not followed by senior Party members or constituency parties other than a few such as Reading and North East Somerset. Below are a selection of the peopel that tweeted the post.

The Lib Dem manifesto itself fared better with nearly 4,000 shares.

Overall, Lib Dem content was shared far less than that of other parties including the Green Party. The Green Party manifesto for comparison had over 7,000 shares, double the number of the Lib Dem manifesto.

Labour’s own content published during the campaign was shared an average of 900 times, significantly below that of UKIP despite having over four times as many party members. The Labour Party’s top three most shared posts were as follows.

The content published by the Conservatives on their site averaged over 2,000 shares, significantly above Labour’s 900 shares but well below UKIP’s average of 5,000 shares.

The real winner of the campaign in terms of getting their content shared widely was UKIP. The posts published during the election period on their own site had an average of over 5,000 shares. This actually compares well with major publishers and this share average is actually higher than the average shares of election content published by both The Guardian and The Telegraph. The most shared UKIP content was as follows:

UKIP’s social media success did not translate in to parliamentary seats though they did come second in 120 constituencies and achieved almost half the vote of the Labour Party.

UKIP appeared to arouse strong emotions and social sharing from both supporters and opponents. Content about UKIP, whether negative or positive, typically received higher shares than content about other parties. Below are some further examples.

The most shared post of the whole election campaign was one critical of UKIP. The post “An English teacher decided to mark a UKIP election flyer that came through her letterbox” received over 135,000 shares.

During the election period I set up a dashboard of trending content on the general election. This dashboard updates every few minutes to show the content that is trending and the most shared content each day. I regularly checked this dashboard throughout and the content with the highest velocity of shares was typically content about UKIP, which supports the findings above that content about UKIP was well shared. 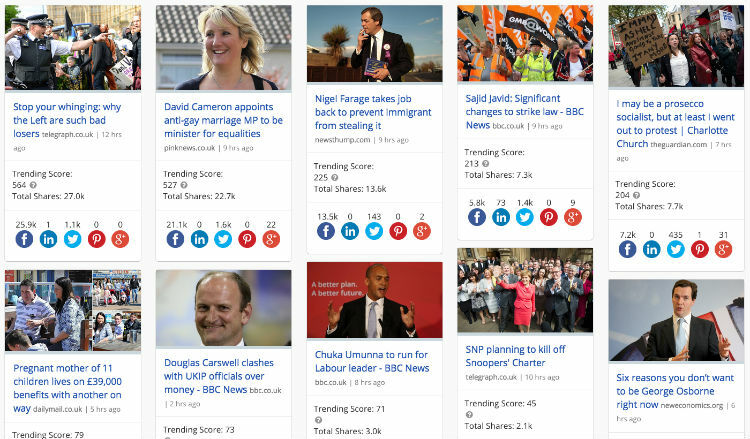 There are a number of lessons we can draw from our analysis.

This analysis was conducted with BuzzSumo. You can do your own analysis of the most shared and trending content for any topic by signing up for the free or paid version at BuzzSumo.