If you haven’t already joined the crowd on Pinterest as a marketer (B2B sellers, I’m looking at you), it’s time.

There are a couple of reasons.

First, Pinterest may not be the biggest of the networks, but it’s still huge: there are 100 million pinners worldwide, which is roughly equal to the population of the UK and Spain combined.

Another reason: the people using Pinterest aren’t just there for the pictures. They are there to shop. A study by Millward Brown and Pinterest concluded that 93% of people who are active on Pinterest are using the tool to plan purchases. That’s 93 million shoppers, in one place.

The third reason is actually the most compelling to me.

It’s a search engine. The CEO of Pinterest has made this point clear, saying in May 2015 that the primary reason people pin isn’t to share content with other people, it’s to save the idea for their own reference.

There are social aspects to the site, like tagging and direct messaging followers, group boards and comments, says Alisa Meredith, Pinterest marketing expert. But, the site also lacks a way to create smaller circles of “friends” or lists that limit the content you see. “They want us to keep widening out and finding new things,” Meredith said. And, that is the essence of search.

Here’s the best part: there’s still room at the table in Pinterest.

Google is crowded. In fact, battling to rank on Google has created an economy of full-time jobs. It’s simply no longer possible to be an early adopter of the “let’s get our site ranked on Google” idea.

But, with Pinterest, there’s still time. Especially as a B2B marketer.

Of course, as with all windows of opportunity, this phase will end; the window will close. Act now is Meredith’s advice.

A bonus–Pinterest, with it’s link-building, social signaling capability, can help you to rank higher on other search engines, and the  boards themselves can get ranked on Google.

When people use Pinterest, they aren’t just thinking about the current state of their lives, looking for a good, current moment to share with the world (Facebook, I’m looking at you). They are imagining what their lives could be like, should be like, might be like…if they simply executed an idea, purchased a product, or followed a plan.

Meredith describes Pinterest as an aspirational network. Aspirational thinking is a powerful state of mind for marketers to target, regardless of their market segment.

For example: Here’s a week from our actual internal marketing calendar for October.

It works. But, it’s not fancy.

Here’s what I see when I look for marketing calendar on Pinterest: 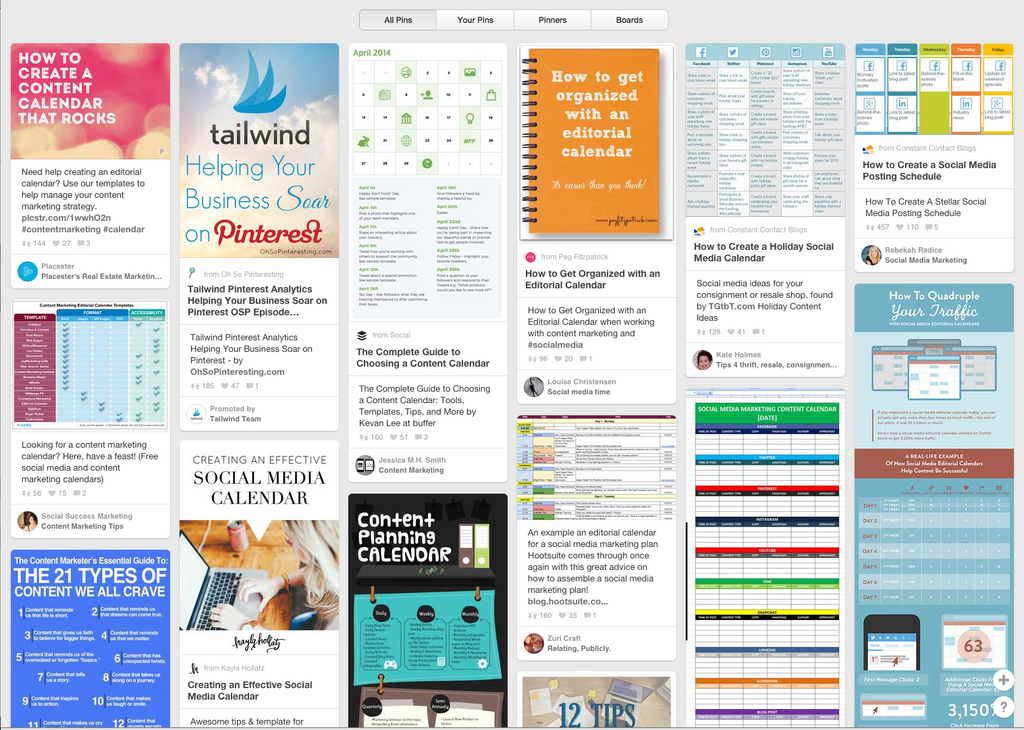 In two seconds, I’m experiencing powerful formatting envy. I want a prettier calendar. I think having one will make me better at my job, and I’m clicking away, pondering the best version of my marketing self.

Before you dismiss my marketing calendar reaction as a function of my gender (Everyone who thinks Pinterest is for girls, I’m looking at you), here are few points from Meredith. The fastest growing segment of Pinterest users is men. [Tweet “There are more men on Pinterest than men who subscribe to GQ and Sports Illustrated combined.”]

Even if you haven’t paid much attention to Pinterest, it’s possible that at least a handful of the 100 million pinners have an interest in your site and are already pinning your content. In other words, people can pin your content, even if it’s not optimized for Pinterest’s highly visual interface.

To find out if this is the case, there’s a simple way to check. Just enter your site name into the following URL: pinterest.com/source/SiteName.com and replace SiteName.

When I tried this with BuzzSumo.com I was shocked to find that we had at least 329 pins from our site.

My next move was to do the same search for competitors. I found that we had many more pins than several competitors. Their tally’s ranged from 1 pin to 175 pins. Next, I looked at the pins coming from an industry giant. There were many, many more than our 329.

It was an ah-ha moment.

The search for my site showed me that people are pinning our stuff. The search for the industry giant told me that a lot of people in our segment are interested in pinning. The search for my competitors showed that BuzzSumo is ahead of the pack at the moment. I decided it was time to be more intentional about Pinterest.

If you, like me, are convinced that you need to be on Pinterest, a data-driven approach can make you much more effective.

Step one: Decide which of your keywords is likely to perform best on Pinterest.

Not all keywords perform equally on the various social platforms. Words that work well on Facebook might not work as well on Twitter, and those that work on Twitter might not work on Pinterest. When you create content with a specific network in mind, you should tailor your approach by using the keywords that are preferred on the network.

The words celiac and gluten-free could both be used in various marketing applications for foods without gluten. But, of the two, gluten-free is much more appealing on Pinterest. If I am using Pinterest to sell products to people with celiac disease, I will want to use “Gluten Free” as part of my descriptions. 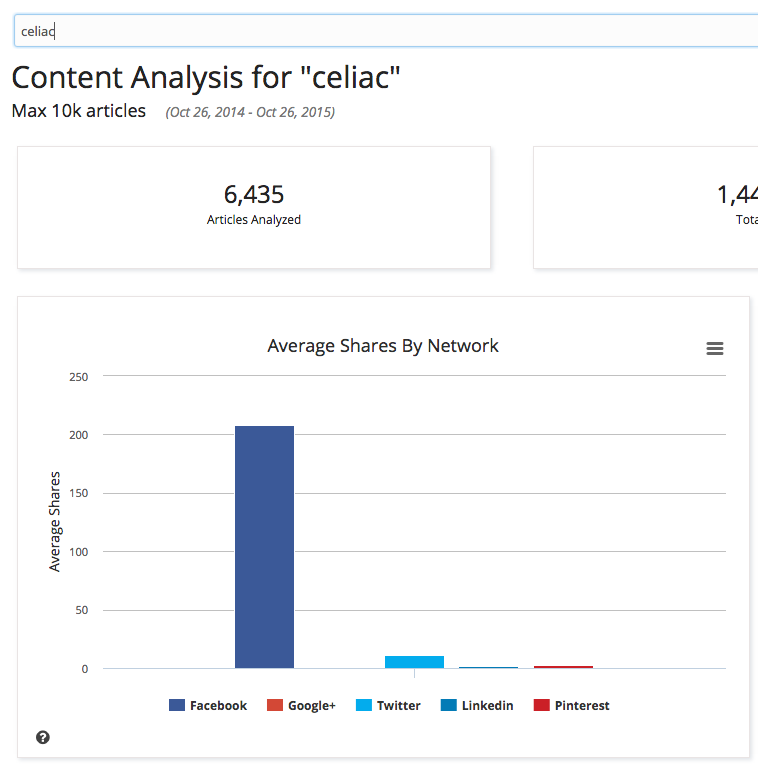 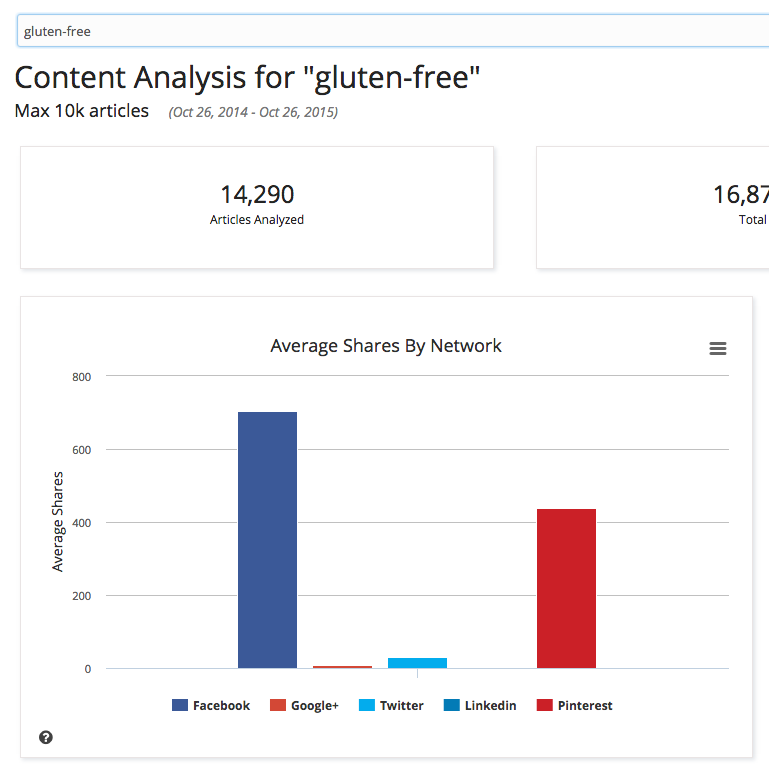 The content formats that work best also changes from network to network.

For example, in this search for “Content Marketing Plan,” it’s clear that infographics are preferred on Pinterest. 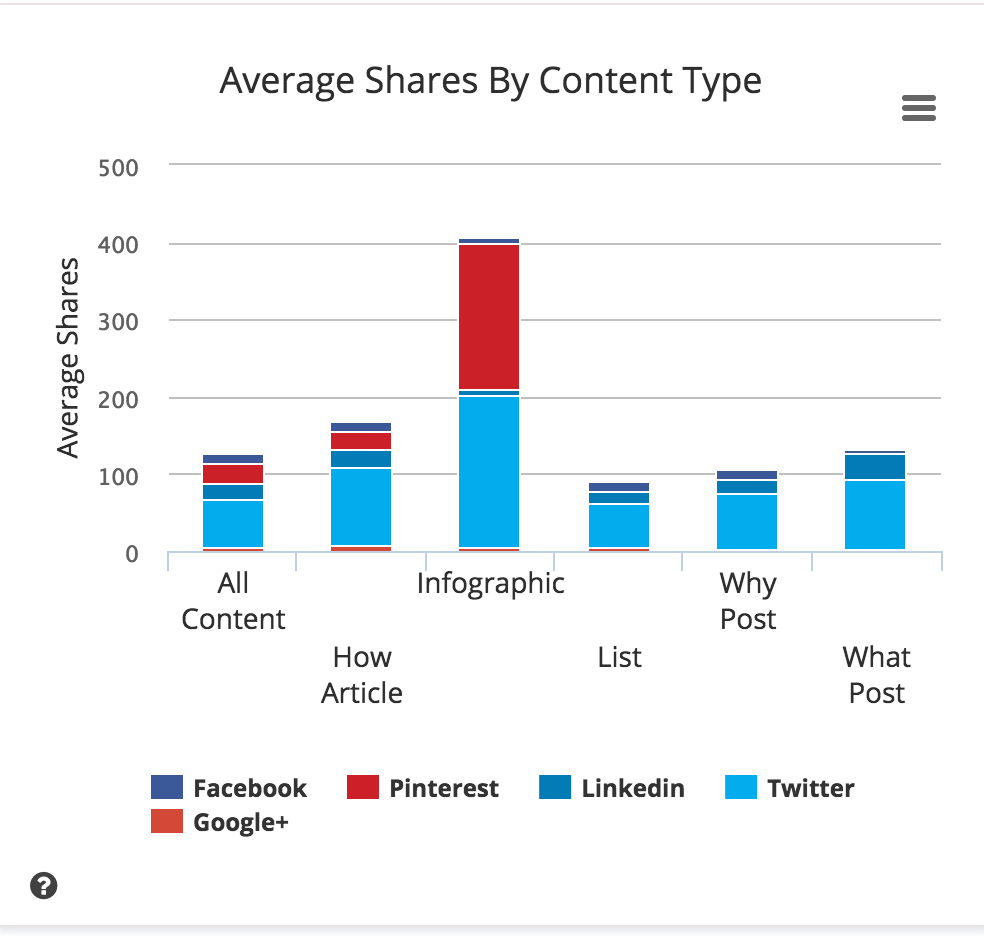 For the topic Gluten-free, list posts are also a good choice. 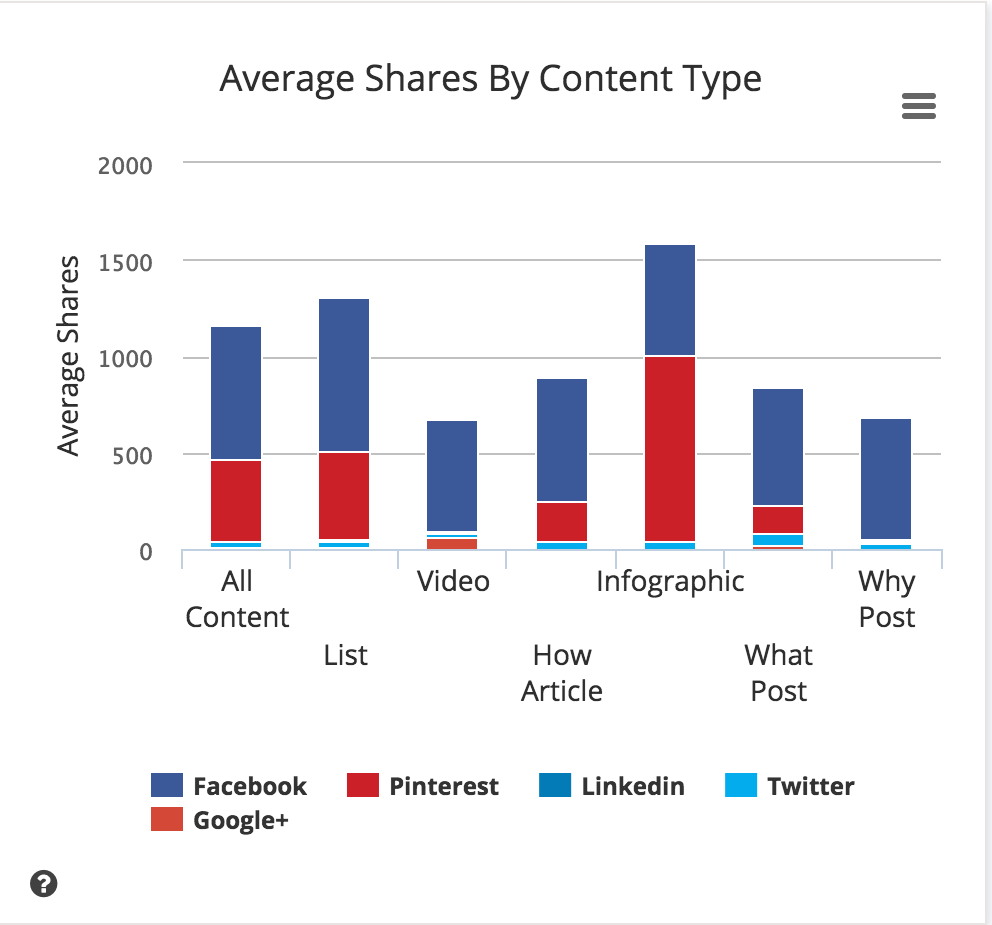 Step two: Think beyond what you sell to what your audience is interested in that relates to your product or service.

The things you pin should attract your audience based on a variety of topics that appeal to them. It’s ok if your boards and pins are only tangentially related to your product. Financial advisors could pin content related to retirement travel, or college savings, or cutting grocery bills, because these are likely to appeal to their audience, Meredith suggested.

This works for B2B brands, too. For example:

GE has an eclectic mix of content on its boards, including fabulous kitchens, DIY Science, and Hey Girl– a board that could best be described as pick up lines for geeks. The GE Pinterest account has 26.7 Pinterest followers.

Organik SEO uses it’s board to emphasize a company value: Green living. Because it’s a popular topic on Pinterest, Organik is able to tap into an audience group that might not otherwise find it’s boards. Organik SEO has 4.1 thousand followers.

One of the best ways to discover the keywords you should be searching for is to utilize Pinterest’s Guided Search, says Melissa Megginson from Tailwind App, a Pinterest scheduling tool. Just type in a keyword that’s important to your brand, and Pinterest will suggest related terms people are searching for.

Pinterest’s audience analytics, which is free to business account holders, is another goldmine. With it, I can see which other topics and which other brands my audience is interested in. I can then pin content of these types to my board.

For example, my analytics show that people interested in the BuzzSumo account are also interested in travel. Even though it’s not specific to content marketing, a travel board may help me to find content marketers who will also connect with my non-travel content. The more I can provide what my audience wants on my boards, the more I can keep their attention focused on my brand. In some cases, I can adapt the suggestions from Pinterest, like “Inspirational quotes” to add a marketing specific theme. 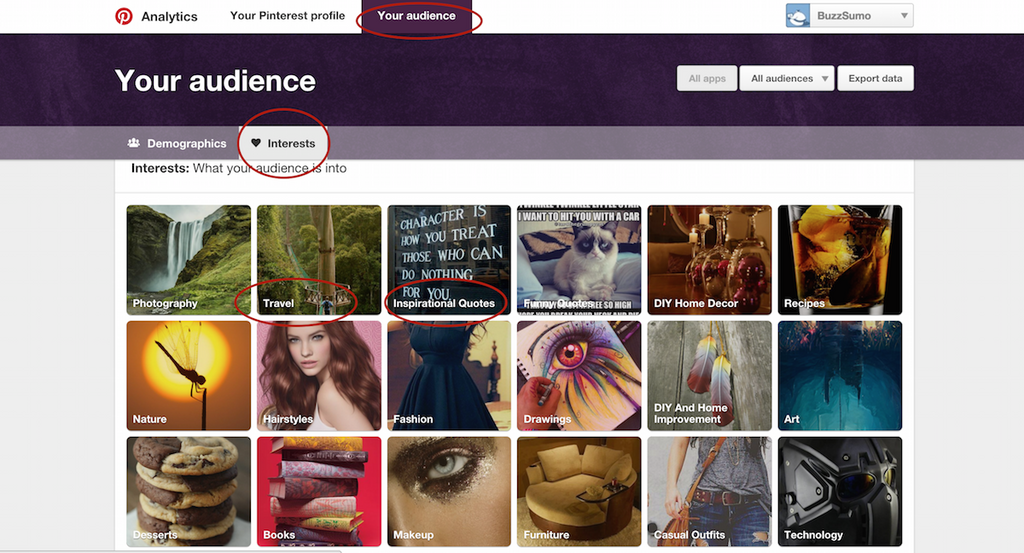 A content analysis report of your topic can also show you which websites get the most pins for your topic. This result gives you a great place to start looking for content ideas.

Original content performs well on Pinterest, Meredith says. So, a great place to start is to pin blog posts from your site. Create a board just for them and put it in the top right corner of your Pinterest page. When people see your board, they will have your original content at their fingertips. This top righthand corner real estate is also the first content to appear on a mobile device. And, it all points back to your site.

Pinterest’s search algorithm ranks pins higher if they have been pinned a lot, according to Cynthia Sanchez of OhSoPinteresting.

BuzzSumo can make it easy to find content on your topic that has gotten the most pins. You can check it quickly to see if you like the look and add the pins directly from BuzzSumo.

There are a couple of things to keep in mind about the visual element, according to Meredith:

Pin descriptions are key to being discovered in search on Pinterest, Megginson says. When you write descriptions for your pins, use keywords that your audience is interested in.

When it comes to influencers, it’s important to keep in mind that just because someone has 4 million followers doesn’t mean they’re right for your company. An easy way to find pinners who are influential in your industry is to find out who’s already pinning about your company, Megginson suggests.  A simple way to do this is to connect your domain with your Tailwind dashboard and find the pins that are driving repins or traffic to your site and nurture those relationships.

15 steps to build a fabulous board in less than 30 minutes:

If you’d like to get started using BuzzSumo to simplify board creation, here’s a soup-to-nuts process to follow:

Repeat with a new audience interest.

For more information, check out our webinar with @alisammeredith: 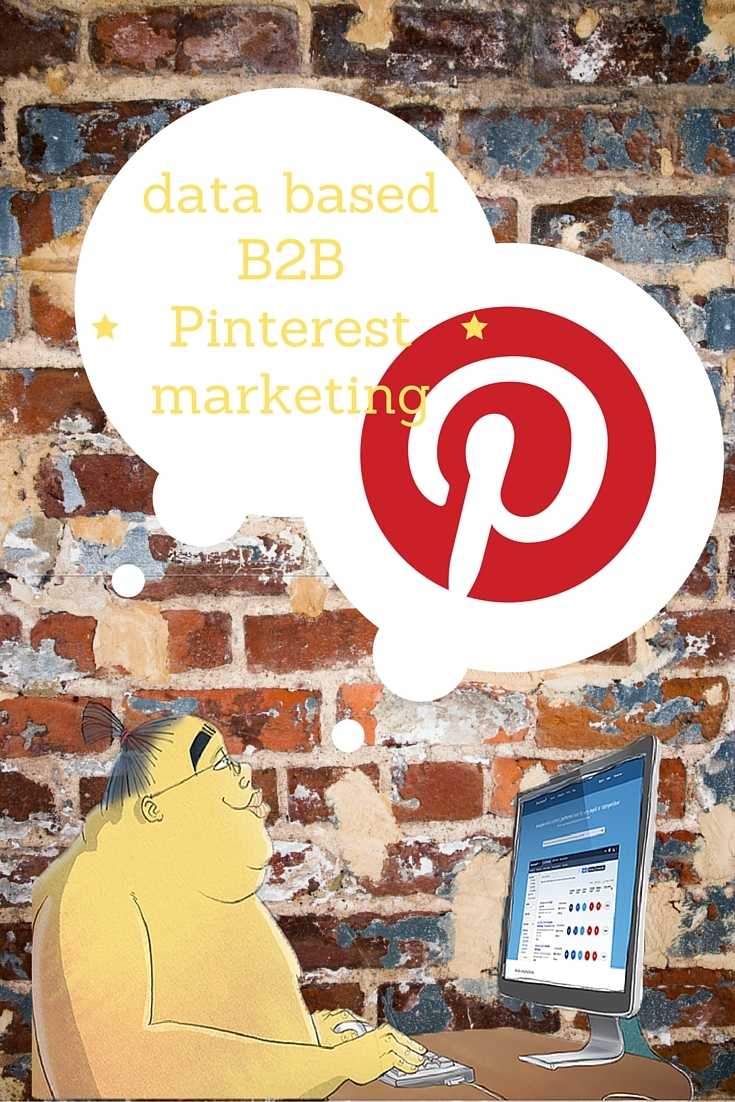