With new four fresh primary victories in hand, Donald Trump is closer than ever to winning the Republican nomination for President — he is also dominating the political scene on line. The volume of shares for content about Trump towers over the shares of content about all the other candidates.

In this post, we will analyze four campaigns, specifically focusing on how their own materials and other content about them has been shared (or not).

The BuzzSumo database has more than 14,000 articles published this year about each of the four major presidential candidates.

Of those articles, content about Donald Trump has been shared 211 million times–far more than any other candidate. Content about Bernie Sanders got the second highest number of shares (153 million) but the gap between he and Trump is formidable. Articles about Clinton and Cruz are even further behind Trump. 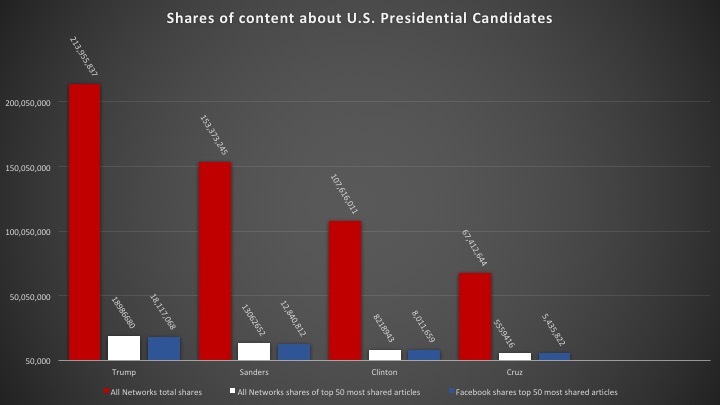 In this race for the presidency, the non-establishment candidates are winning the contest for on-line attention.

Is negative content really that bad for a campaign?

Certainly, a lot of the content online about Mr. Trump (and the other candidates) is negative. But, now that we are halfway into the primary season, and Trump has won state after state’s electoral votes, it would seem that the negative content is not a deal breaker for voters.

As brilliantly summarized in a cnn.com piece by Van Jones, there is considerable evidence that candidates who are able to effectively use new communications technologies are often victorious in their races. Jones noted the innovative successes of FDR with Radio, JFK with television, and Obama with the Internet. Jones speculates that Trump’s effective use of social media could catapult him over the Republican party’s objections and into the Oval office.

Now that reality TV and vitriolic rhetoric on social media have become cultural norms, Jones also speculates that Trump’s background in reality TV, makes him more comfortable than the other candidates with controversial and negative content about his campaign. Trump may be the new master of social media and that may lead to a victory in November. 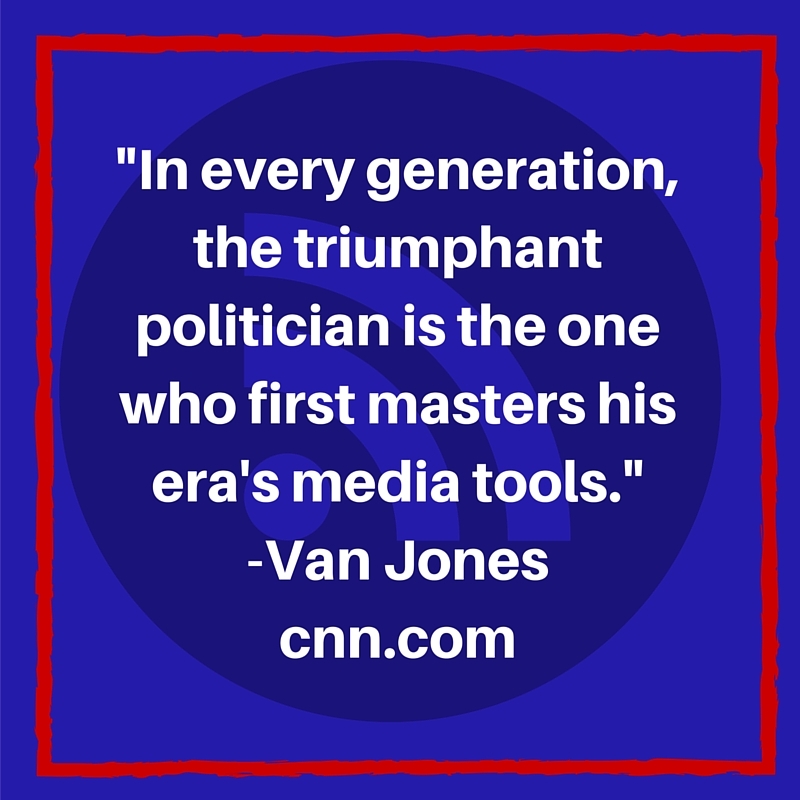 There’s more content online about Trump than the other candidates

A Google search for all the candidates returns more results for Donald Trump (347,000,000 in roughly half a second) than any of the other candidates. That’s only 50 million less than the number of results for the Bible, which has 397,000,000 results.

The first result for Trump is news, followed by a link to the Trump Organization site, and the @realDonaldTrump twitter account. The campaign website donaldjtrump.com is the fifth result listed.

Searching for “Hillary Clinton” returns 155,000,000 hits. The first result served by Google for Mrs. Clinton is an ad for her official campaign website, followed by news, and an unpaid link to HillaryClinton.com.

The Google search also verifies the age-bias often experienced by women. Hillary, younger than both Trump and Sanders, is the only candidate for whom Google auto-suggests the additional topic “Age.” Even Cruz, whose relative youth could be considered by some as a drawback,  doesn’t get an auto-suggest for “Age.”

Twitter–who has the most powerful audience? 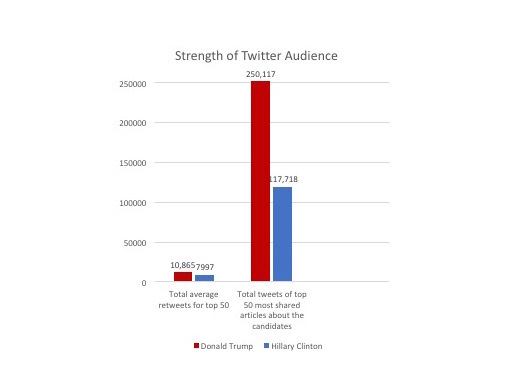 This discrepancy was fueled in part by the influential nature of Trump’s twitter audience.

The top 50 people to tweet content about Mr. Trump had average retweets totaling 10,865. Mrs. Clinton’s most influential tweeters had a total of 7997 average retweets.  (I did not include Mr. Sanders in this metric because many of the twitter accounts with high average retweets that tweeted about Sanders were off topic, humor-only, or suspected spam accounts.)

Interestingly, the most influential person to tweet content about Donald Trump wasn’t a supporter–it was Hillary Clinton, who averages 1,297.2 retweets every time she tweets. Mr. Trump averages a much more modest 211.9.

The tweet about Mr. Trump from Mrs. Clinton was a link to a YouTube video of Clinton on the Seth Meyers show talking about Donald Trump–specifically how she no longer thinks Trump is funny. The video, ironically has accrued more thumbs down votes than thumbs up votes (3,016 boos to 2,865 yays). 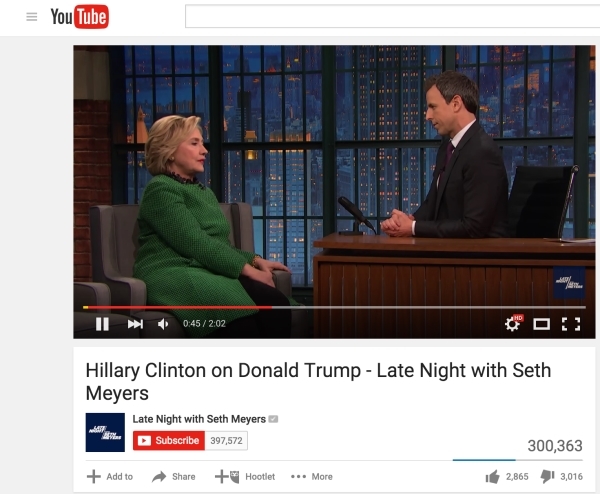 Those who dislike Trump may be dismayed to know that his Facebook page has almost twice as many likes as the next closest candidate–6.4 million; Sanders page has 3.3 million, followed by Clinton and Cruz with 2.8 and 2.0 million respectively.

And, Trump’s page also is the clear leader in terms of overall interactions–shares likes and comments. His page is ranked 604th world wide; the next closest US presidential candidate is Bernie Sanders, whose page is ranked 1,261; Clinton ranks 2,338 and Cruz 1,794.

If you are curious, the top 20 Facebook pages worldwide can be found at SumoRank.com.

As a topic on Facebook, Trump inspires hate and mockery. But, it also inspires people to share, like and comment. All but one of the 20 posts about Donald Trump are either extremely negative (not one, but two explicit Hitler comparisons) or mocking. Those top 20 posts alone were shared more than 20 million times.

The top 20 posts about the other candidates combined got 12.7 million shares.

The best slogan gets shared

BuzzSumo’s database of most shared content includes 1,922 articles with “Make America Great Again,” in the title or topic. Those articles have gotten a total of 1.2 million shares over the course of the last year, an average of 658 per article. 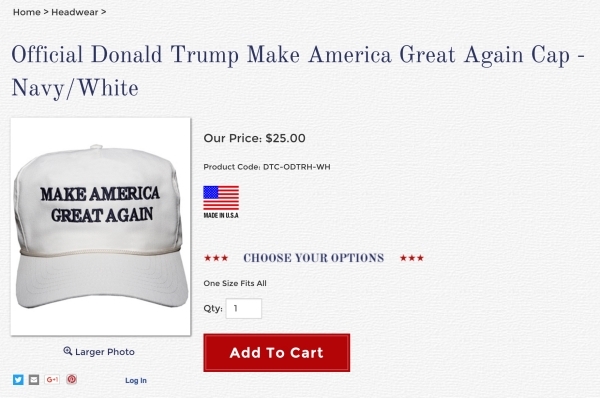 For perspective, content about “trade deficit” got an average of 35 shares per article.

Hillary Clinton’s campaign slogan wasn’t initially clear on her website. The large print on the header said, “She’s with us;” the people behind her in the top photo hold signs that say “Fighting for us;” her t-shirts said, “Hillary.” None of these slogans had clearly identifiable shares on social media in conjunction with the Clinton campaign.

Sander’s slogan was as obscure as Clinton’s, and there were only 48 articles with the “Courageous Conservatives” tagline of the Cruz campaign in the BuzzSumo most shared database.

There is a qualitative difference in the most shared content from the Clinton campaign site and the Trump campaign site.

But, the content offered on the Trump and Clinton sites is very different. Clinton seems to be focused on gathering email addresses; Trump on making money and explaining positions.

Of the top ten most shared pieces of content from HillaryClinton.com, nine are landing pages designed to collect information. Only the tenth offers anything other than a sign-up field. It’s a piece by Elizabeth Chan titled, “The world is a better place because Hillary Clinton was secretary of state. Here’s why.”

Unsurprisingly, there are no backlinks to the Clinton landing pages. 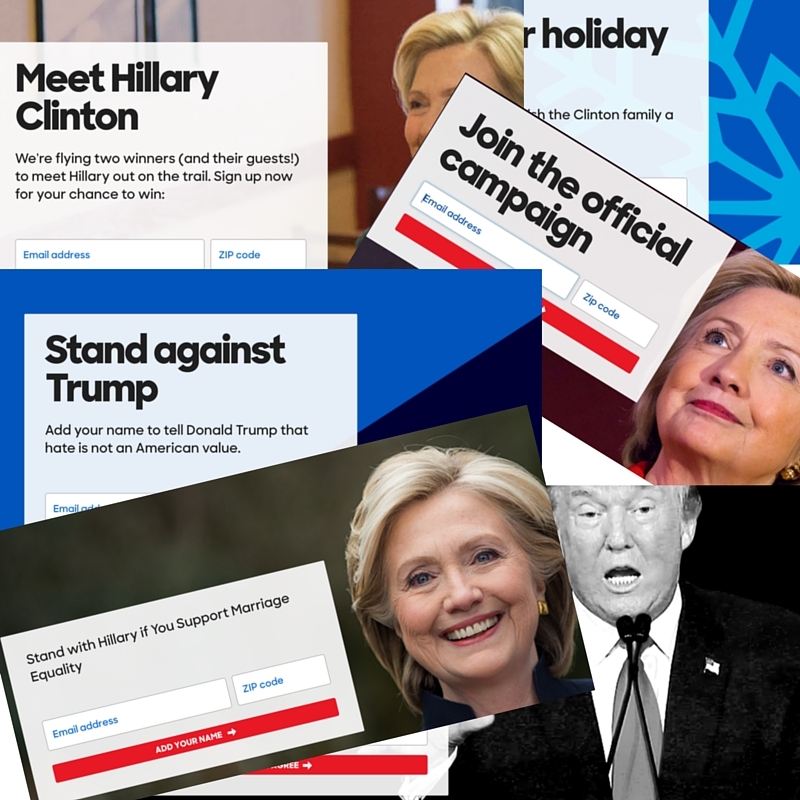 Trump’s two most shared pieces of content are the hat sales page mentioned earlier and a second store item–Trump signage. After the Trump gear, the next most shared articles are all platform explanations: Second Amendment Rights, Tax Reform, Healthcare Reform, Immigration Reform, and Veteran’s Administration Reform.

All of the top seven most shared content pieces at donaldjtrump.com have substantial backlinks. The immigration platform (not surprisingly) has the most –1577 links from more than 700 root domains (not all positive). But the Trump-hats-for sale page also got 37 backlinks, including links from the WashingtonPost.com, cnn.com, salon.com, and gq.com.

The difference between the types of content at both sites and the content’s ability to gain backlinks confirms earlier research done by BuzzSumo, which indicated that more in-depth content is likely to gain links. In the context of a presidential campaign, it would seem that campaign stances are the substantive, link-generating content.

It’s also interesting to note that in a self-funded campaign run by a businessman, sales of merchandise is a primary focus of the site.

Of the four candidates’ websites, only Trump’s has any highly shared video content–an average of 5000 shares. The top seven most shared videos are all TV spots, embedded into the Trump campaign site. 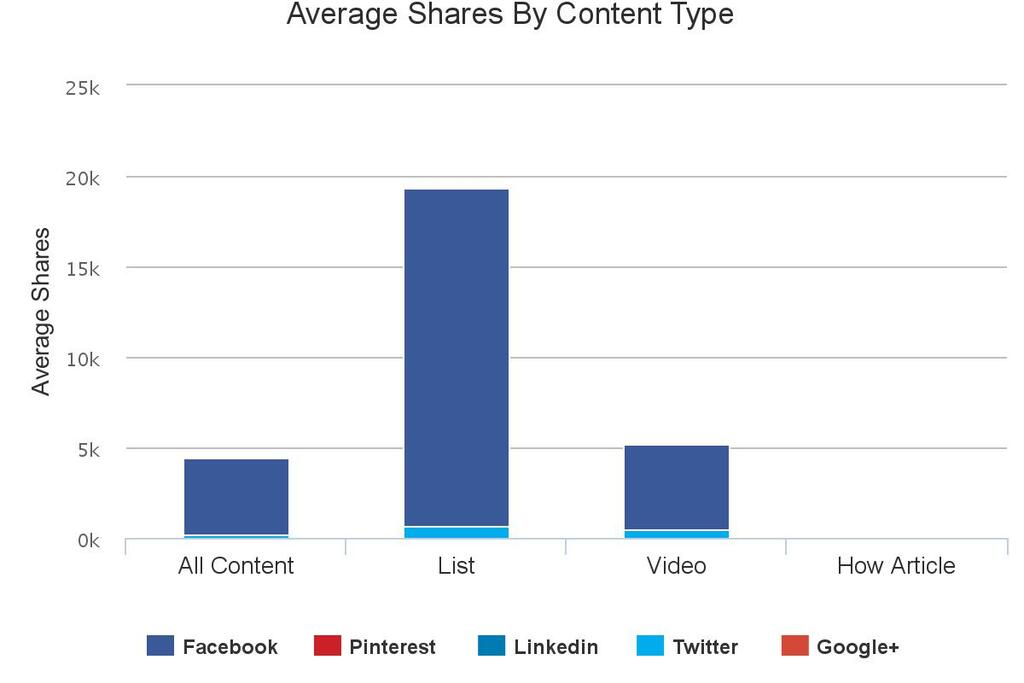 If Jones’ theory is correct, an audience accustomed to reality TV may not be turned off by negative video content, finding it instead an expected part of the equation.

Pinterest is lauded as an aspirational search engine, where people search for products and processes to improve their lives. But, compared to the other networks, not as many people are sharing content on Pinterest about the candidates, and there are indications that the Pinners are taking a humorous approach to the campaign.

Of the four candidates I analyzed, the top 50 most shared content pieces about Hillary Clinton got the most shares on Pinterest; the top 50 articles about Cruz got the least. Clinton is also the only candidate whose site encourages visitors to follow her on Pinterest. 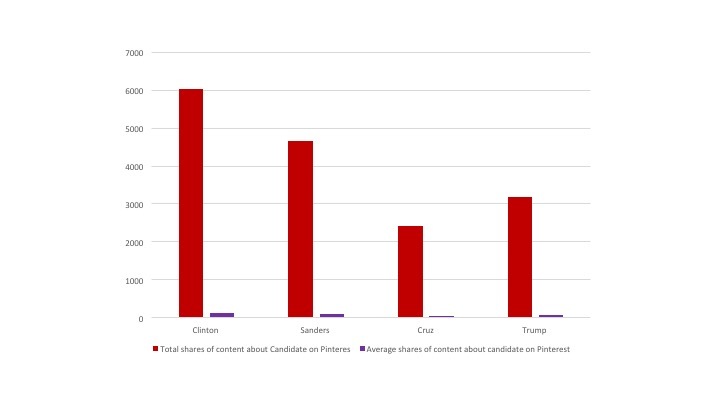 The guided search function offered by Pinterest is an interesting way to envision what the network’s users are searching for.

It’s impossible to draw direct correlations between the guides suggested in conjunction with various searches, cautions Tailwindapp.com’s Daniel Maloney. And Pinterest’s own documentation does not clearly spell out how the social network’s algorithms choose content to suggest in its guides.

Pinterest consultant Kim Vij, observes that the topics and related topics suggested by Pinterest are populated from left to right based on the volume of content and repins.

The guided search and suggested topics for each candidate look like this:

If Vij’s theory about how these suggestions are determined, then the Pinners who are interested in the presidential candidates are also looking for funny content about them.

In terms of online exposure, Donald Trump’s campaign has gathered more shares than any other candidate. Bernie Sanders is second. Both of these candidates are outliers within their own parties; the more established political party candidates have not gained as much on line exposure.

If Sanders and Trump are populist candidates, then the center of populist conversation–social media, is their forum.

A campaign slogan that delivers a clear, non-candidate focused message is a huge asset, as it is capable of taking on a life of its own.

Controversy will increase exposure for political candidates, gaining more attention for them in social media. It’s too early to tell if this type of mass attention, some good, some bad, some ugly, will translate into votes.

If Van Jones is correct, a culture primed by reality tv and truncated sloganizing on social networks may be ready to vote for candidates whose campaigns have a significantly controversial slant.

Our conclusions about the campaign today are based primarily on the number of shares that content about candidates have achieved. There are other metrics to consider.

We welcome your thoughts about the election and the use of social media in all of the campaigns.