From Fluff To Funding: How Content Helps Grow Your Business 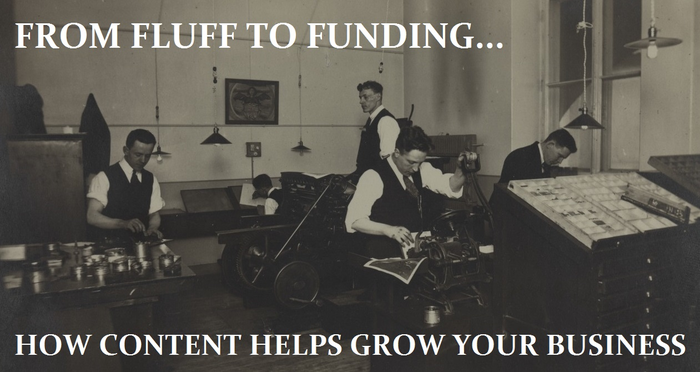 Over the last half decade, content marketing has been credited with PR, image building, SEO capabilities, and customer acquisition, nurturing and loyalty. But attracting venture capital funds? That’s something we rarely hear in the same breath as content marketing.

A strong content marketing program builds a positive impression in VC’s mind even before your pitch lands in their inbox. It tells them that you know your stuff. And for any VC, having a prospect who really knows what they’re doing is priority #1. It means you have a much better chance of success than the Average Joe entrepreneur who is simply in a me-too business.

Moz is the perfect case in point. Even if you know the story, let’s revisit it. Brad Feld and the Foundry Group invested $15 million in Moz as part of the Series A total of $18 million that the company raised in 2012. Rand Fishkin wrote about the emotional roller coaster that the entire funding process turned out to be. While what-to-do-to-secure-VC-funding nuggets litter the entire post, two interesting pieces of information stuck with me.

One, Rand attributes over 85% of newly acquired customers to inbound marketing methods including content marketing.

While this is an impressive number in itself, here comes the more interesting part…

“How do I know Brad? Through three of the more unlikely sources imaginable: first, Brad + Seth had looked at SEOmoz briefly in our 2009 raise attempt, but, like a lot of others, passed at the time; second, through my blog post on failing to raise money (which Brad read and wrote about); and last, through my wife Geraldine, whose blog and tweets are apparently a topic of enjoyment between Brad and his wife Amy.”

Now, most of us marketers are familiar with Moz and their awesome products. Chances are Feld and the Foundry team did too. However, Rand directly credits a very specific blog post he wrote on the subject of failed attempts at securing VC funding as well as his wife’s travel blog as two key preambles of his eventually successful dealing with the VC who ended up investing $15 million in his company.

Great content automatically catches users’ attention. Once hooked, users keep coming back for more quality stories, thus turning your content assets into preferred information destinations. Which VC would refuse a brand that has built a virtuous cycle of fantastic content that pulls readers towards itself?

Founded in an MIT Lab in 2006, HubSpot not only coined the term Inbound Marketing, they single handedly brought about a paradigm shift in marketing. Online marketing transformed from the traditional practice of bombarding users with advertising messages across various platforms to a more refined strategy of creating and publishing highly interesting and valuable content that users actually seek out by themselves. That your brand benefits in the process is a welcome result.

HubSpot personifies how content marketing should be done. To begin with, HubSpot is a maker of SaaS tools for marketing professionals. THAT is their core business. How do they promote this business? Simple, by practicing what they preach. They have a huge range of free marketing resources that their target audience (marketing professionals) can browse through at will. Their Marketing Grader offers marketers a free insight into where their websites stand vis-à-vis various key marketing metrics. The HubSpot Academy offers authoritative courses and content that budding marketers seek out. They host webinars that simplify every minute aspect of marketing and get thousands of registrations for each one. You get the picture.

All of this concerted effort in creating and publishing fabulous content has resulted in VC funding of more than $100 million. This was not just through one or two rounds of funding. HubSpot actually went through six separate rounds of funding with a slew of VCs footing the bill including General Catalyst Partners, Google Ventures, Sequoia Capital, Matrix Partners and more. 2014 saw HubSpot go public with an impressive IPO that raised over $125 million. I wouldn’t dare label that kind of money as fluff, to be sure.

Content marketing also works the other way around. Yes, strange though it may sound, VCs have been spending big money on marketing themselves to attract the best businesses in town. While most entrepreneurs imagine VCs to be these hallowed beings resting in their ivory towers, the reality is VCs face competition too. In these cash rich times for technology and related startups, VCs often have to outbid and outsmart a bunch of competitors for a prized business investment. And they have resorted to content marketing as a means of attracting the right businesses to their doorsteps.

First, the new breed of entrepreneurs are digital natives used to heading straight for Google to learn about anything, including potential VC partners. From a VC’s perspective, creating a large body of authoritative content helps them position themselves as viable investment partners, people who can really drive growth in a potential entrepreneurial venture.

Second, once VCs put down their money into a business, they have a vested interest in accelerating its growth and profitability. A lot of VC content marketing revolves around offering professional business advice to existing partners.

Whichever side of the fence you may be on, there’s one consensus that dictates the course of your marketing plan for the foreseeable future. Before you seek investments in your business, invest in creating or even curating content that your target audience will seek out. Great content marketing has an uncanny habit of attracting not just customers, but finance and funding as well.