What Are May 2015’s Most Shared Websites?

We analysed over 10 million articles published by the most popular sites on the web during May, to find those with the highest average number of shares per post.

Online publishers have never had to compete so hard for that sought after share. The Guardian isn’t just competing against the BBC. BuzzFeed aren’t alone when it comes to catchy quizzes. Brands are becoming publishers in order to stand out online and sometimes, it’s just a random Tumblr blog  that  steals the limelight after all.

But which sites typically get the most shares per post?

We thought it’d be interesting to find out. So we analyzed all the posts published by the busiest 2000 sites on the internet during May. That equated to over 10 million articles, videos and images, posted in one month alone. Here’s what we found.

The Most Shared Major Publishers

Let’s start with the biggest, most well known publishers. How did they stack up against each other during May?

In order to remove the smaller publishers and other sites, we classified major publishers as anyone in our top 2000 who published more than 7000 articles during May: 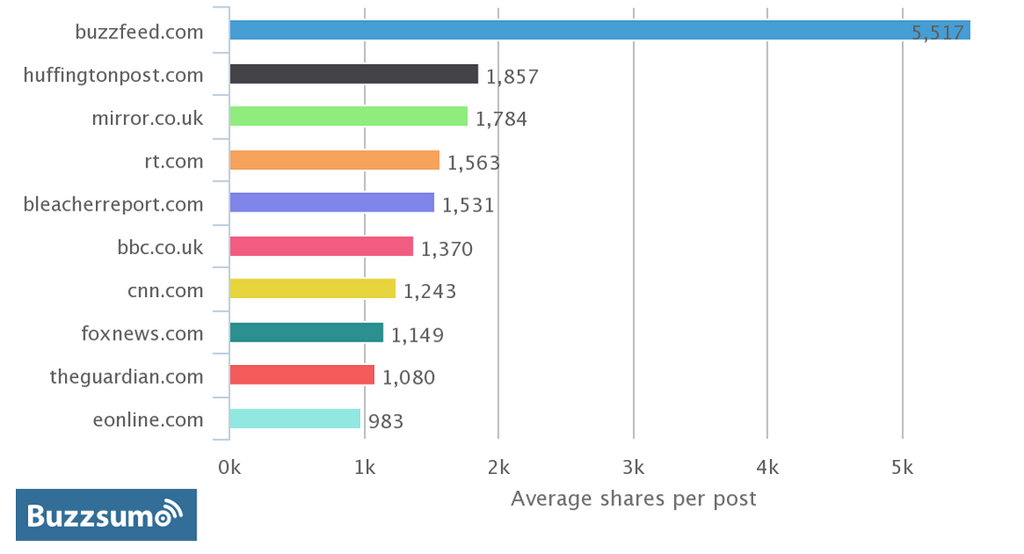 It’s clear from the chart above that BuzzFeed is still very much in a league of its own when it comes to consistently creating highly shareable content. With an average of 5517 shares per post, they got nearly 3x more shares than runner-up Huffington Post.

However, it’s worth noting that BuzzFeed also produced the lowest volume of articles in the top 10. We found 7236 shared articles published by BuzzFeed in May, compared to The Guardian’s 13k, Huffington Post’s 15k and a whopping 32k from the BBC. So on sheer share volume the picture is probably different.

Without BuzzFeed, the rest of the group is a lot more condensed. Typically the major publishers got between 1000-2000 shares per post.

The Most Shared Sites Overall

What does the chart look like though if we lower the barrier to entry? Since we’re looking at the average number of shares per post, we still need some threshold in order to stop sites with a single viral post ranking highly. Here’s what the chart looks like if we lower it to just 100+ articles published during May: 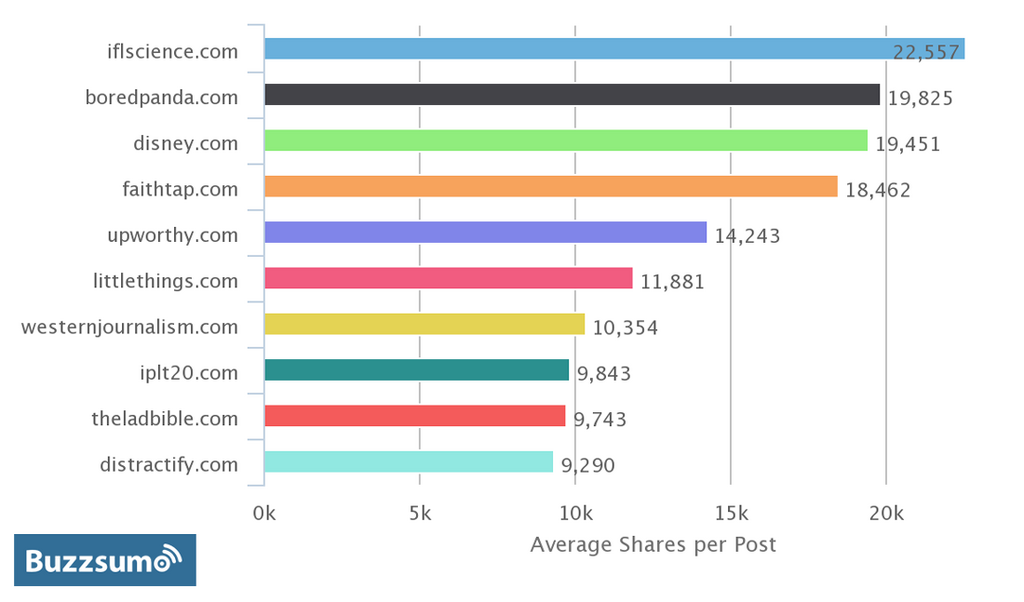 The picture here is very different. Since the entry level was just 100 articles, we’ve opened the floodgates to a diverse range of smaller publishers and the major players have vanished. On average they produced just 463 articles during May. So it’s unlikely they could keep up these numbers if they started producing as much content as our major publishers, who published an average of 13,432 articles over the same period.

Nevertheless, IFLscience achieved a huge average of 22,557 shares per post over 450 articles. The runners-up are also a lot closer. Bored Panda, a site that allows anyone to upload content, came in a close second with 19,825 shares and Disney also did exceptionally well.

For both of the above charts, Facebook completely overshadowed the other networks. To the point where the other networks were almost entirely irrelevant to the overall rankings. Put another way, if we sorted by average Facebook shares & likes instead of the total of all shares (Twitter, Facebook, Linkedin, Pinterest & Google+) the positions remained almost identical.

This may not come as much of a surprise. For a start Facebook is by far the largest social network. It’s also probably fair to say some of the sites above are more well known for their Facebook page’s than they are their websites.

For example, IFLscience is not really a major publisher or brand, yet their Facebook page has an incredible 20 million+ likes. Double that of BuzzFeed & the Huffington Post combined. Clearly their content and style resonates on Facebook.

Facebook’s size and potential to drive huge traffic means ignoring it is probably a bad idea. A popular Facebook page can drive an enormous amount of traffic and shares. But it’d be naive to conclude that the other networks are worthless. In fact as analyzed below, often the other networks are often more important for particular brands and niches.

The Most Shared Brands

What constitutes a “brand” in this context is quite subjective and compiling this list required some manual filtering. We wanted to exclude big publishers and instead focus on the brands who are actively engaging in content marketing for their business. Therefore we didn’t want to include domains where the product pages had attracted more shares & likes than editorial content, as these will often be driven by paid promotion. 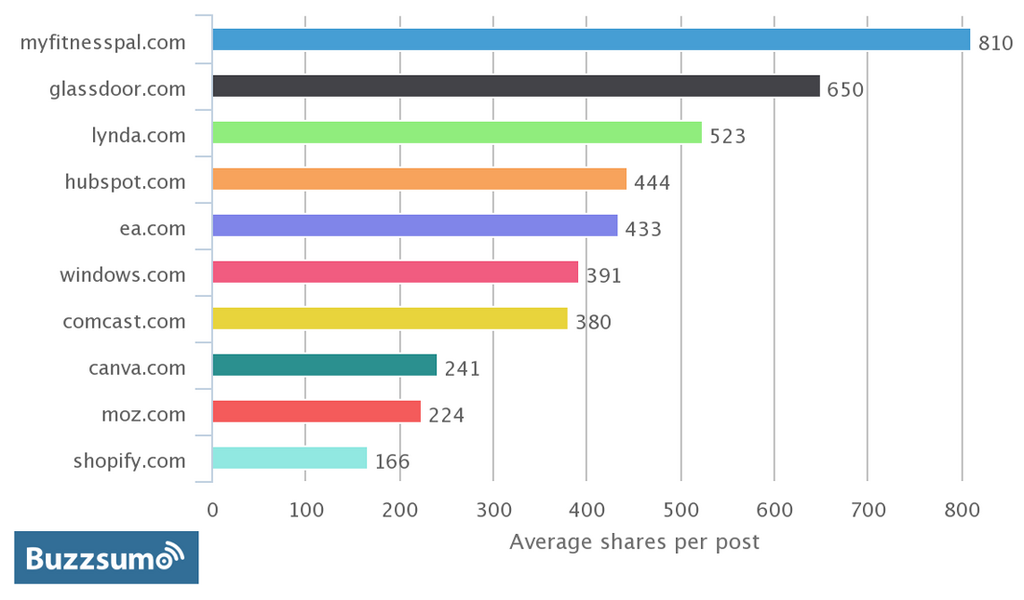 Obviously this is far from an extensive list, we’re just looking at English language posts, in May 2015. It’s also going to exclude a lot of smaller brands who haven’t published as much volume. But it does highlight some great brands doing excellent content marketing though.

MyFitnessPal have a great health & fitness blog that propelled them into first position with nearly 200 shared articles. Rather like the most shared websites above, they also have a very popular Facebook page that no doubt helps drive shares (facebook.com/myfitnesspal – 1.2 million likes).

Glassdoor also have a popular blog but did exceptionally well in May with their “25 Best Cities For Jobs” piece, attracting considerably more shares than a normal post would for them.

Hubspot and Moz produced considerably more content than the rest of the group and are probably the two you’d expect to stay in the top 10 throughout the year. If we’d looked at the total number of shares during May it’s likely they’d come out on top. Moz’s top piece was “The Web Developer’s SEO Cheat Sheet 3.0” whilst Hubspot did really well with their “The Ultimate Inbound Marketing Career Kit” post.

EA’s success is almost entirely down to it’s starwars.ea.com subdomain, with some great content on the production of the new film. Canva also have a great blog, but did particularly well with their “20 Things You Should Never Say to a Graphic Designer – But Probably Do – Design School” post.

Most of the sites featured had 1-2 standout pieces of content during May. That is, content that typically got shared far more than an average piece. This was especially true for Glassdoor, where their top post had over 40k shares yet all the others had well under 1000. Identifying these posts on your own site and analysing the reasons they were so much more popular should be a focus for everyone. That way you can spend more time working on content that really has an impact.

Which sites did the best on Twitter during May? 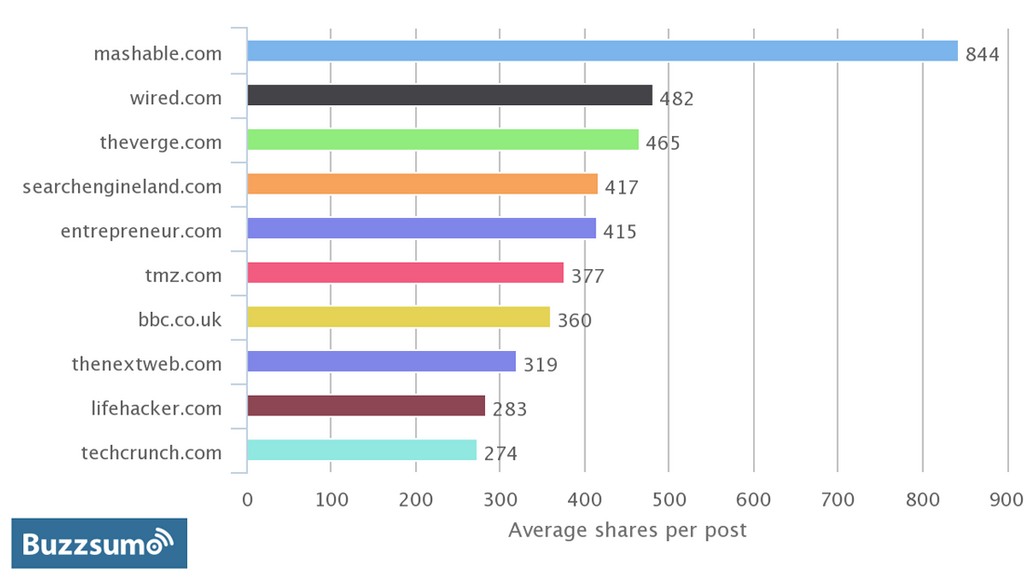 We established that Facebook makes up the vast majority of most sites social shares, so it’s interesting to see what the top 10 looks like if we just use Twitter shares.

It’s pretty clear that tech publications rule here. With 7/10 being mostly tech focused. Mashable are doing considerably better than the others though. Interestingly though their top three pieces on Twitter during May were non-tech related: 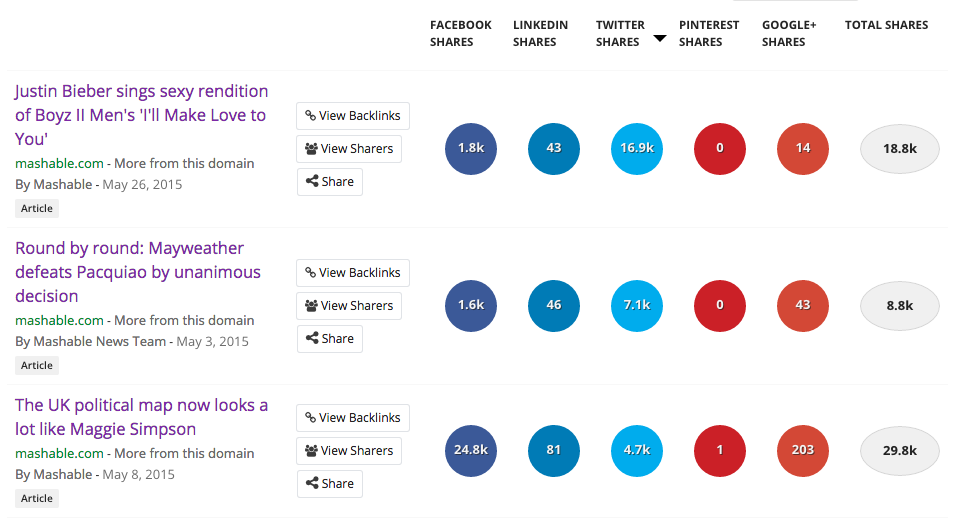 We first started by fetching the list of the top 1 million sites from Alexa (you can download the list here). Their traffic rank estimates how many visits each site on the web gets, so it was a quick way to remove a lot of low value sites that typically don’t get many shares, but take time to check. We then just took the top 2000 and used BuzzSumo data to calculate the average number of shares per post across all networks, during May.

Most of the sites featured above had an Alexa rank of well under 1000 so it’s unlikely anything outside the top 2000 would rank alongside them. Finally we wanted to focus on just the English language sites for a fairer comparison, so we removed sites where their primary language wasn’t English.

Were the results as you expected? Let us know in the comments!