What Content Gains Shares & Links on Medium? Research From BuzzSumo

Medium has become a popular online publishing platform. It is a new breed of social journalism site, effectively a blog host featuring a hybrid collection of amateur and professional authors, publications and exclusive blogs. Medium is not without its problems, as its CEO, Ev Williams discussed in a blog post but it is estimated that it now has over 60 million monthly visitors. We decided to take a look at content on Medium and specifically the content that gains shares and links last year to see what we could learn.

We looked at a total of 132,000 Medium posts. This was made up of the 11,000 most shared posts published each month in 2016, broadly the top 25% most shared posts. The average total shares for these 132,00 posts was 379 . Total shares include Twitter shares, Pinterest shares, Google Plus shares, LinkedIn shares and all Facebook interactions including shares, likes and comments. Almost 90% of these shares came from Facebook. There was also a skewed distribution of shares, with a small number of highly shared posts. The median total shares was 43 i.e. 50% of posts received 43 shares or fewer.

The average number of links to these Medium posts from unique domains (linking domains) was 2.4. However, the median was zero i.e. 50% of posts in our sample of the 132,000 most shared articles on Medium received no links. The upper quartile was just one i.e 75% of posts received one link or no links. There was also no correlation of shares and links.

49 of the 100 most shared posts on Medium last year were about the US election or related politics. There were over 5,000 posts about Trump alone and these tended to get higher shares, with the top posts typically gathering tens of thousands of shares. The average shares of Trump posts was 1,241 compared to 379 for our sample as a whole.

We know people are motivated to share content to support causes they care about, to show they are members of a tribe and to get the words out about specific issues. Thus when it comes to political posts people are not necessarily sharing because a post is interesting or thought provoking.

Medium in many ways is a news site and headlines don’t follow the viral formats of marketing posts. However, headlines still matter. If we examine some of the top headlines it is clear they contain value promises, are controversial or are intriguing. Below are the top 6 most shared posts last year. The headlines are reasonably typical of well shared posts on the site, with the exception of the list post. The top 100 posts contain very few viral headlines and only 3 list posts. 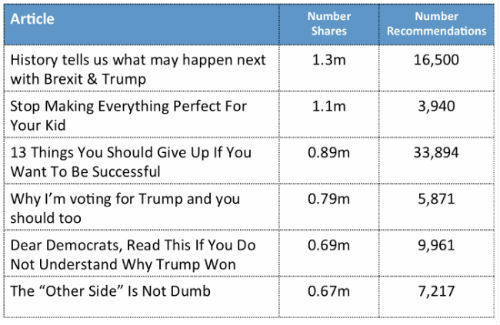 History tells us what may happen next with Brexit & Trump

Stop Making Everything Perfect For Your Kid

Why I’m voting for Trump and you should too

Dear Democrats, Read This If You Do Not Understand Why Trump Won

The “Other Side” Is Not Dumb

We analysed the top posts by number of linking domains and found very little overlap with the most shared posts.

The posts that gained the most links were less political but were some of the most original, thought provoking posts in my view. The headlines of these posts did not follow typical viral formats.

Here are four examples from the top ten (number of linking domains in brackets).

The positive I take away is that original, well written stories and articles are recognised and referenced by other authors in the form of links.

Some linked posts also gained shares, for example ‘The other side is not dumb’ received over 600,000 shares, partly because of the interest in politics and echo chambers last year. However, ‘Conversational commerce’ received twice as many links but received just 3,000 shares. This may be because it contained important and interesting ideas about the future of commerce.

The takeaway for me personally was to create a feed of the most linked articles as these appear to be consistently interesting and thought provoking.

We took the top 10,000 most shared posts and analysed these by word length. Our findings confirm what we have found in previous studies. Namely that most content is less than 1,000 words and that on average, longer form content, particularly over 2,000 words, gains more shares and significantly more links.

However, we should not get too distracted by long form content or recommend everyone starts writing long form content, as 6,817 of the top 10,000 most shared posts on Medium (68%) were less than 1,000 words. However, longer form content, particularly over 2,000 words, does appear to consistently gain more shares and links on average.

The most popular topic last year was not surprisingly the US election and politics. Political posts included gender and generational politics. In the top 100 most shared posts there were a fair number of gender related posts such as Why Women Smile at Men Who Sexually Harass Us and Men Dump Their Anger into Women.

We also identified a number of popular topics outside the political arena. For example:

There were over 5,000 posts published on Medium on children and parenting. These received 183 shares on average and the median was 8. There were a number of parenting posts in the in top 100 most shared posts including the second most shared post Stop Making Everything Perfect For Your Kid

There were nearly 4,000 posts published on Medium last year about artificial intelligence or machine learning. On average the shares were 98 and the median was 9. The top post was Deep Learning Is Going to Teach Us All the Lesson of Our Lives: Jobs Are for Machines.

A wide range of sports and news stories were well shared. Whilst there were many life tips and productivity tips, few of these broke into the higher most shared stories. One exception was  “13 Things You Should Give Up If You Want To Be Successful” which received over 800,000 shares. This was also a rare exception of a classic viral headline doing well.

Only 3 posts in top 100 most shared posts were list posts. However, previous research has suggested that list posts do better on average so we wanted to look at this in more depth. We took 199 posts in our data set with headlines that started “10 things” or “10 tips”. These posts had average shares of 545 compared to 379 for our data set. They also had median shares of 50 compared to 43 for the data set. Thus there is some very limited evidence that list posts do better on average when it comes to shares in our sample of 132,000 posts.

Interestingly when we looked at linking domains, the average for list posts was 1.15 compared to 2.4 for all 132,000 posts in our sample.

The nature of Medium as a blog host with a mix of professional and amateur writers and exclusive blogs means that there is a very wide range of content. However, we can observe: 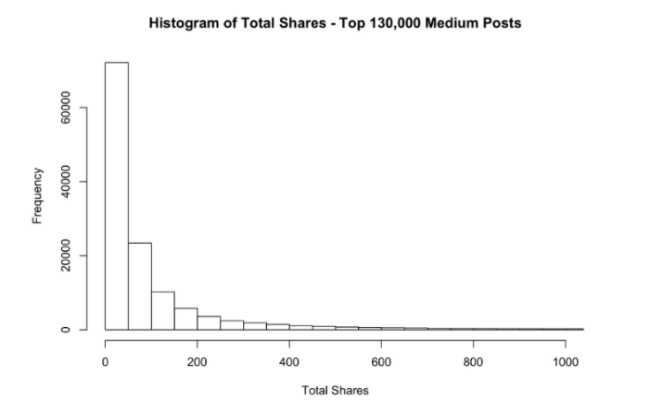 This skewed distribution means that very high performing outlier posts (a few posts had over 1m shares) can skew the average.

Most shares or interactions came from Facebook, particularly when it came to high performing posts. The average numbers were:

The histogram for those posts that gained at least 1 link is shown below. The graph is cut off at 10 links as very few posts gained more than ten links. 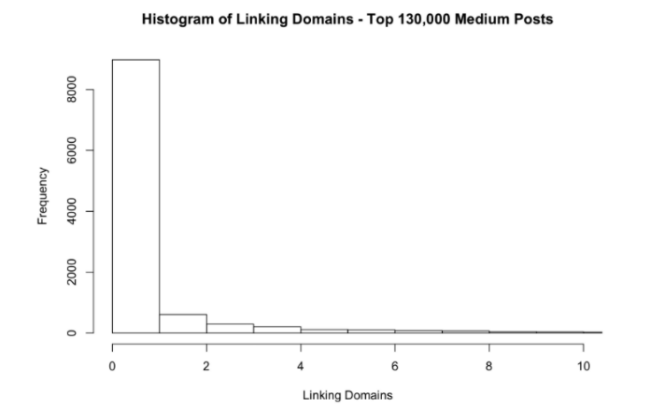