If you have a Facebook Share or a Like button on your site, as we do on this page, you will see a number alongside it which is “the sum of:

Thus the Facebook number you will most commonly see is the total for all interactions including likes, shares and comments. However, are total Facebook interactions a good indication of content resonance?

Many people have argued that Facebook shares are more powerful than ‘likes’ and you should really just look at Facebook shares to see what content is resonating with people. From our research things are not quite so simple and there are benefits in looking at total Facebook interactions.

Here’s what we will cover as we explore these ideas:

‘Likes’ are the quick and easy way to share

As an example of a ‘like’ being a quick way to share content, my partner liked a post by Andy Murray tonight and it immediately appeared at the top of my News Feed along with the image, as you can see below. 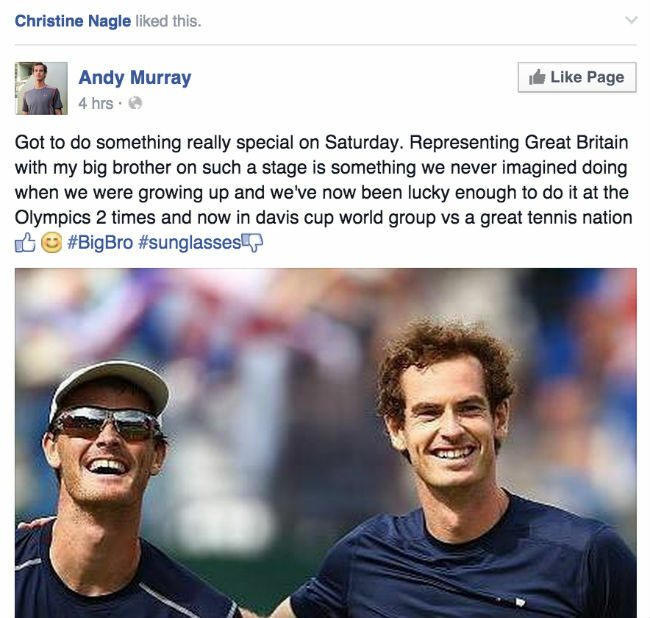 Do ‘likes’ tell us anything about users and content resonance?

Some people argue that the like’ is the “lazy” option and means very little. It is quick and easy to ‘like’ something, unlike commenting or sharing where users need to spend some time writing about the post they are sharing. This is definitely true, shares are harder to earn. However, for many busy users this is the advantage of the ‘like’ button and it means they can share more content than they would otherwise.

The degree to which people ‘like’ content was revealed in a Pew Research Center survey. The survey asked thousands of Americans about their social media sharing and found that 44% of Facebook users “liked” content posted by their friends at least once a day, with 29% did so several times per day.

A further separate study published by the National Academy of Sciences found that by analyzing the “likes” of 86,000 volunteers they could predict the characteristics of the person with incredible accuracy. They could predict whether someone was:

They found they could also predict a person’s political leaning, Democrat or Republican, with 85% accuracy. This would appear to indicate quite strongly that people ‘like’ content that resonates with them.

Thus maybe, and I accept this goes against much conventional wisdom, the frequency and nature of ‘likes’ is a more important indicator of content resonance than is often thought. However, let’s look at the argument for shares and why these may be a better indicator.

Marketers generally place a higher value on Facebook sharing than on ‘likes’ according to this AdWeek article. The argument for the greater value of shares runs along the lines that sharing involves greater commitment and is more likely to mean content is shown in News Feeds.

The second argument for shares is the potential for shared content to be seen by far more people. A share will for example show more clearly on your own profile page than a ‘like’ which comes under recent activity. However, it is unlikely many people will go to your personal profile page. What most people will see is their News Feed. It is claimed that the Edgerank algorithm, which determines what shows up in the News Feed, gives far more weight to ‘shares’ than ‘likes’ leading to more visibility for content shared than ‘liked’. However, whilst this may be the case, the appearance of articles in News Feed is a complex matter.

“The goal of News Feed is to show you the stories that matter most to you. To do this, we use ranking to order stories based on how interesting we believe they are to you: specifically, whom you tend to interact with, and what kinds of content you tend to like and comment on.”

Thus the Edgerank algorithm looks at many factors. Facebook is also constantly updating the algorithm and the control a user can exercise over what appears in a News Feed. For example, the following are two updates:

June 2015 – Time spent viewing stories is added as a factor

“We’ve discovered that if people spend significantly more time on a particular story in News Feed than the majority of other stories they look at, this is a good sign that content was relevant to them.”

“To help prioritize stories, and make sure you don’t miss posts from particular friends and Pages, you can now select which friends and Pages you would like to see at the top of your News Feed.”

Facebook’s aim is to ensure what appears in a News Feed, other than sponsored paid content, is relevant to the user. This clearly takes into account many factors as we can see from above, including an individual’s privacy settings. Shares and likes are just one part of a more complex picture about what appears and where in News Feeds. As organic reach declines there is a view that to make sure your content is seen you really have to pay to play.

Shares may also be more valuable as they can be driven by different reasons to ‘likes’. The Marketo and Brian Carter study found that people share content to share tips and advice, to warn people, to pass on deals, to show they are part of a community and to entertain their friends with amusing or inspirational posts. ‘Likes’ may be used more, as Facebook indicate, to give positive feedback to people and things you care about.

I think there is another potential argument in support of shares over ‘likes’ namely that shares are a little less easy to automate than ‘likes’. Whilst Facebook is constantly rooting out false accounts, ‘likes’ may be slightly more at risk to exaggeration than shares through automation and non-human activity.

Searchmetrics produce a respected report each year looking at the factors that distinguish well-placed sites from those with lower positions in the Google search results. We took a look at the 2014 report and its correlations for Facebook activities.

The report found, not surprisingly, that relevant, quality content ranks better on average, and is “identifiable by properties such as a higher word-count and semantically comprehensive wording.” However, the report also looked in detail at the correlations of various factors with rankings.

The top ranking correlations from their latest survey are shown below. Please remember, as the report’s authors are at pains to point out, that correlation does not mean causation.

There is little question that to share content on Facebook or to comment requires more time and commitment than to simply ‘like’ content. However, ‘likes’ are an important social currency. As Facebook say a ‘like’ is the quickest way to share content and this results in much greater volumes of ‘likes’ than shares which we can see from the Pew research. There is also value in the ‘like’ data to the extent it can accurately predict not only people’s characteristics and interests but the political nature of stories that resonate with them.

There will of course be times when it is useful to break down Facebook activity into shares, comments and likes. However, as a single indicator it appears that total Facebook interactions (the combined total of ‘likes’, shares and comments) provide a good indication of content resonance.

I was going to say I will now put my tin hat on and keep my head down but I would really love your views. What do you think and what does your experience tell you?