What Are The Key Insights From Facebook Video Engagement Analysis?

What a difference a year makes. Last summer we wrote a post on why video is key to Facebook marketing. This summer our research data shows just how overwhelmingly dominant video, including Facebook Live video, has become. We analyzed 100 million Facebook videos published in the last year and using this data we can reveal:

Videos are the Facebook format most likely to reach and engage audiences according to Locowise. The average video post in April 2017 reached 12.05% of the total page audience, just ahead of photos at 11.63%, links at 7.81%, and status updates at only 4.56%. Videos also had the highest levels of engagement.

For major publishers, such as The Guardian, the most engaging articles on their website are traditional text articles. But when it comes to Facebook, the top performing content is video. Below are their top four posts ranked by engagement. 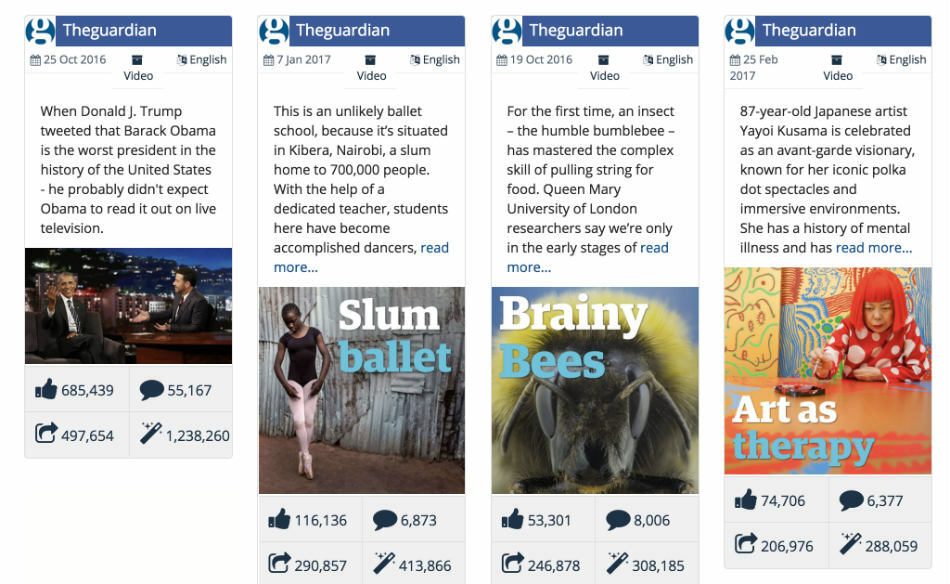 What Are The Video Topics That Generate Most Facebook Engagement?

The most popular video topics ranked by Facebook engagements were as follows. 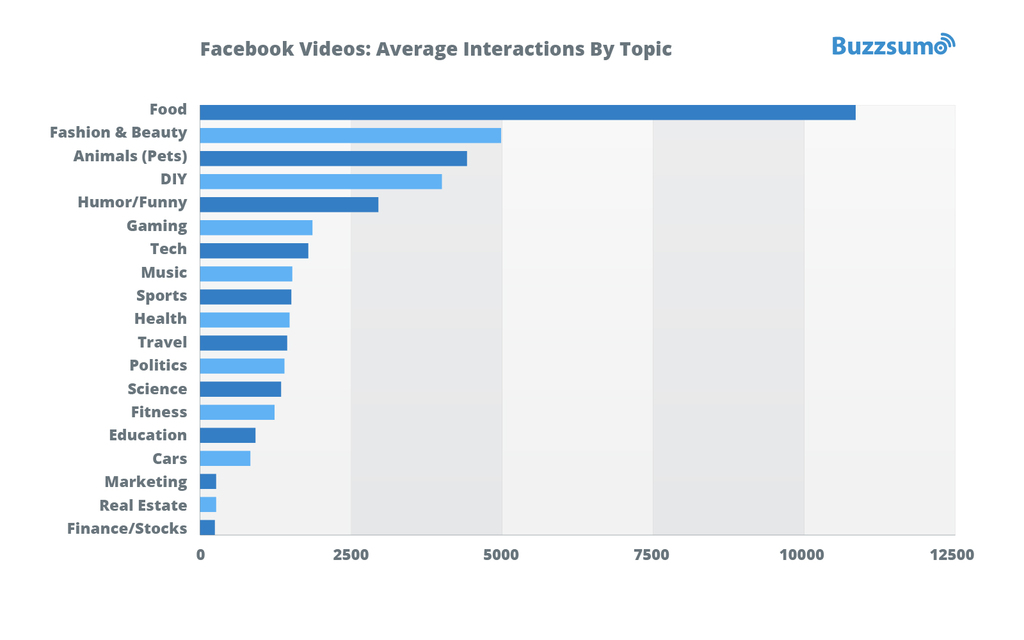 As we can see food is a very popular topic. Pages such as BuzzFeed Tasty get very high levels of engagement. Below are their top four videos in the last 6 months. Turns out that Banana Bread Cheesecake is considerably more engaging than Real Estate – in Facebook videos, at least… 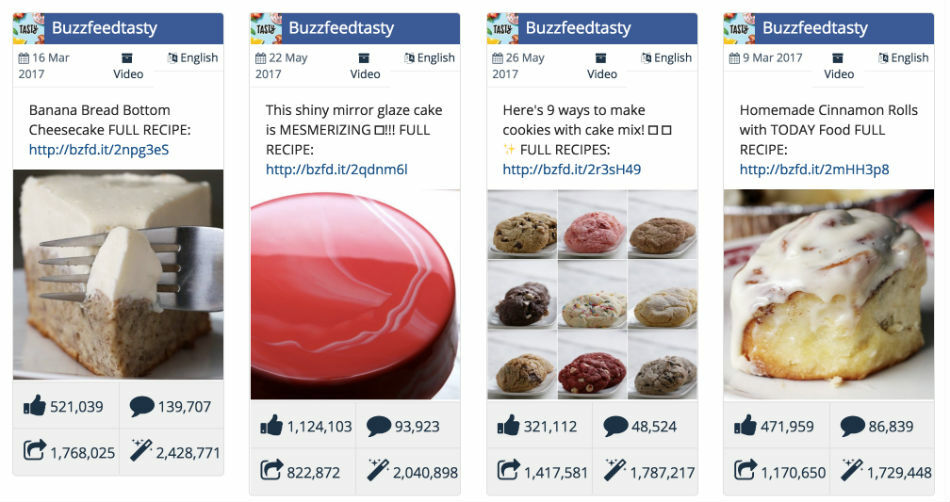 When it comes to DIY, pages like First Media Blossom also generate exceptionally high levels of engagement. Below are their top videos in the last year. 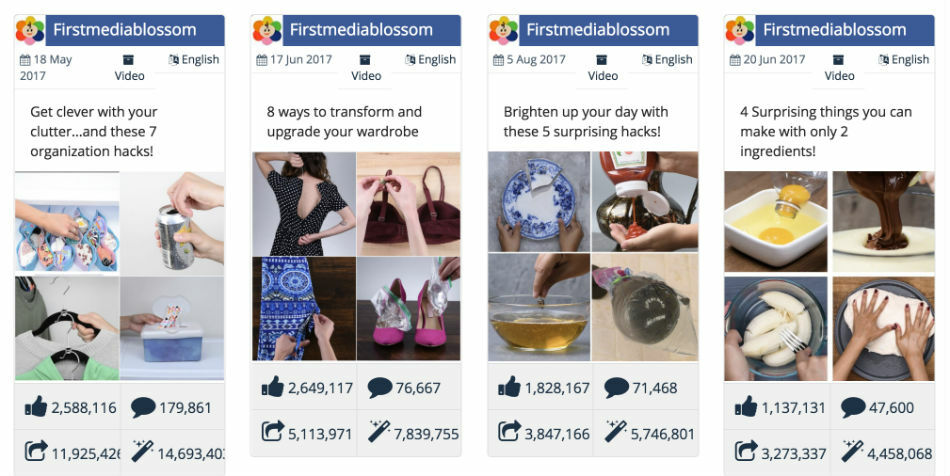 These are in effect how-to videos that are well edited with high production value. Food and DIY are visual topics with broad appeal, so they lend themselves well to short videos.

See how to find evergreen content in our mega guide.

What Is The Optimum Length For A Facebook Video?

As we can see from the chart below, our analysis of 100m Facebook videos published last year shows that shorter videos generate more interactions on average. The sweet spot for video length is 60 to 90 seconds. 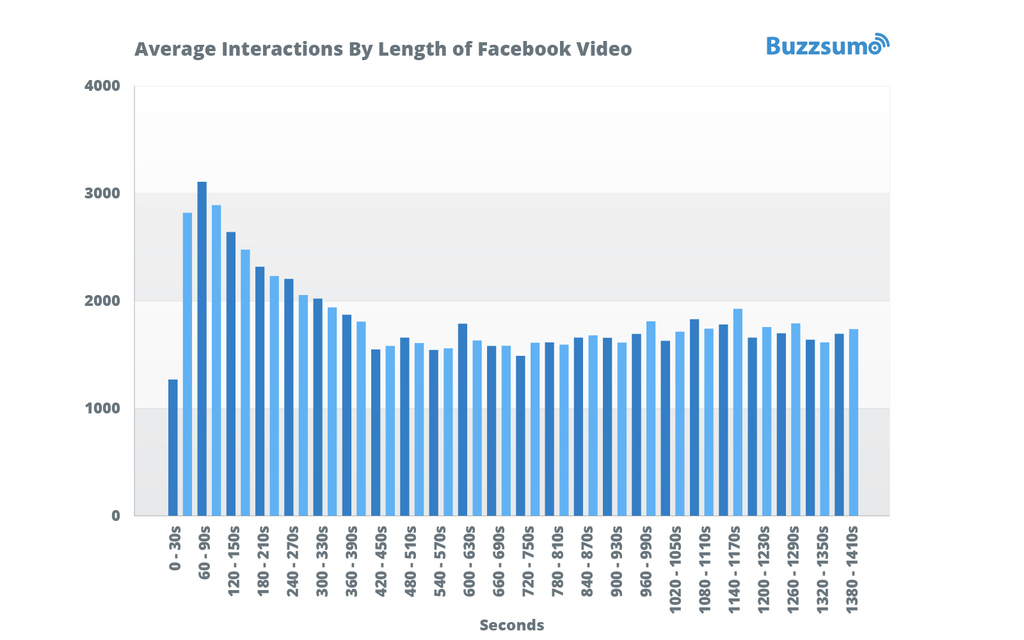 After 90 seconds average engagement fell as the video length increased, until around 6 minutes when engagement remained constant. It is interesting to note that very short videos of below 30 seconds generated the lowest engagement on average overall.

What Is The Optimum Length For A Facebook Live Video?

The number of Facebook Live video broadcasts are growing. In April 2017, Fidji Simo, Facebook’s head of video, announced that 20% of all Facebook videos are broadcast live and that the daily watch time for live videos had quadrupled in the last year. This is in part due to the priority Facebook has been giving to live video.

Our analysis of Facebook Live videos found that interactions increase the longer the video lasts, until about 15-16 minutes. After this time the interactions remain fairly stable. 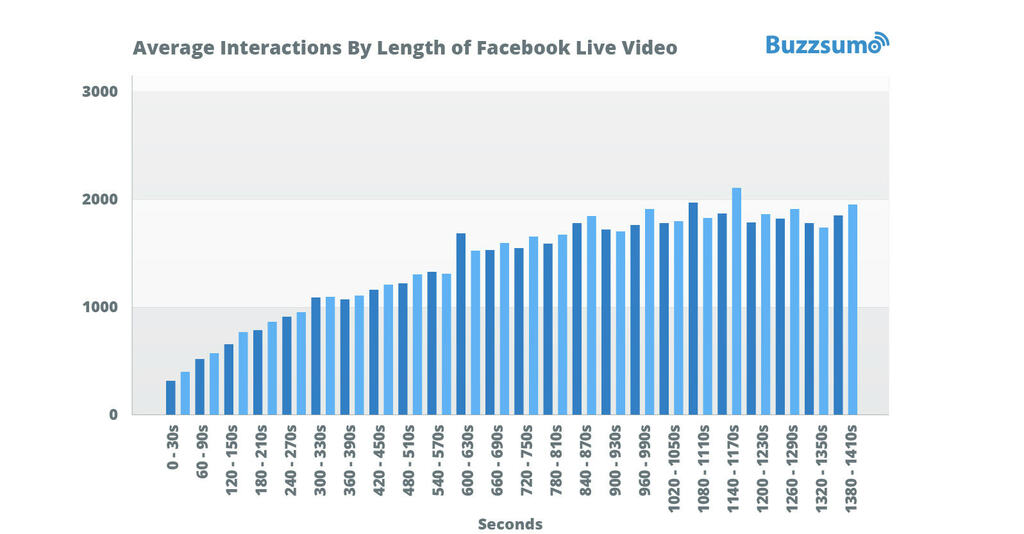 This makes intuitive sense as Facebook Live Videos will typically be longer than other videos. For example, if you are doing a live Q&A then a video of under say 3 minutes is unlikely to provide much value. Also doing a live session requires a certain minimum time to allow users to join or see the event is taking place. From the data it would appear that Facebook Live videos should be a minimum of 15 minutes to gain maximum engagement.

When we looked at the top performing 10,000 Facebook Live videos we found they were 20 minutes long on average.

This was surprising as many people are reporting much higher levels of engagement with Live videos. However, we should emphasise that these are average figures across a very large sample of posts.

We also found that Facebook Live videos attract a much higher number of comments relative to overall interactions. Around 25% of the interactions were comments. This makes sense as it’s a live session with people asking and answering questions and responding in real time.

What Are The Most Common Reactions To Videos? There were so many different videos that provoked laughter, but many were simple and joyful such as this one. 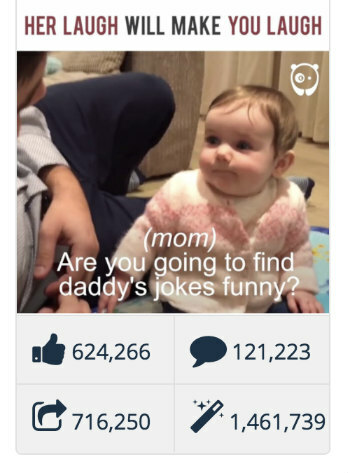 If only all audiences were as engaged as this little girl…

The top videos generating love reactions tended to be more reactions to films, sports stars and celebrities. Here are a few examples. 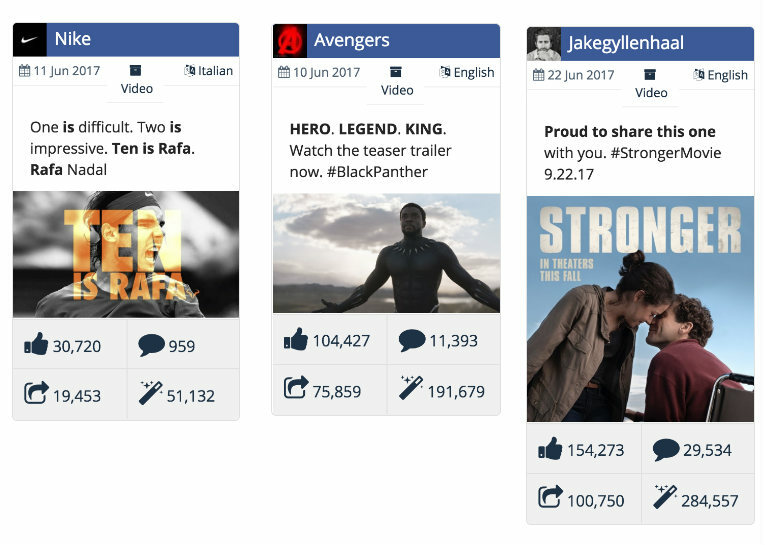 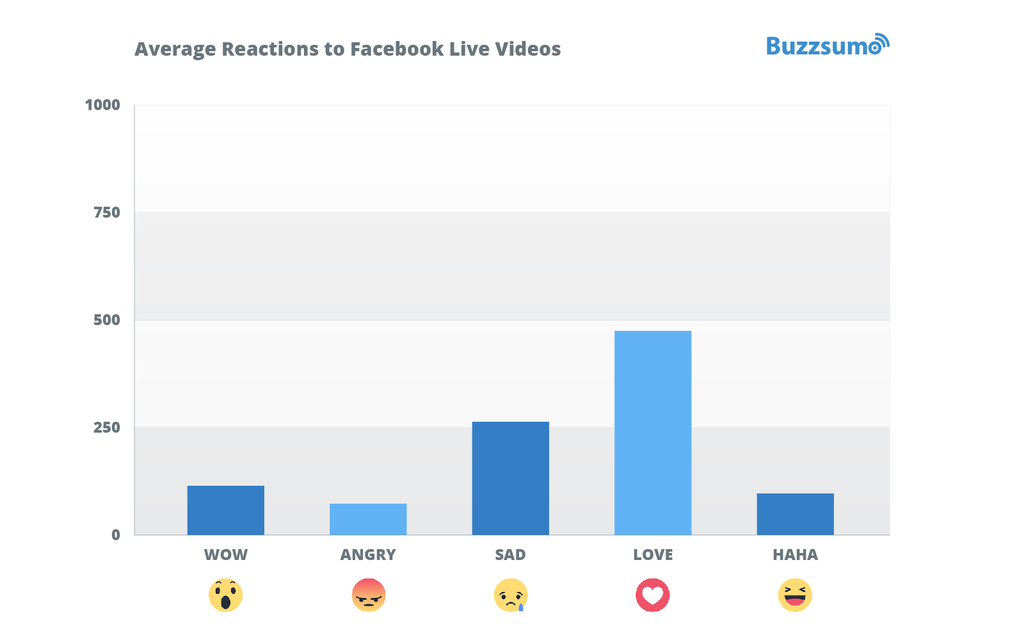 How Much Introduction Text Should You Use For A Facebook video?

We analyzed the top 10,000 most engaging Facebook videos between June 2016 and June 2017 and found that for these top performing videos the introduction text was very short. The average was 84 characters and the median was 61 characters.

As an example here are the top three video posts for the Redbull Facebook Page. They keep the introduction very short and just get you to dive into the video: There are number of observations we can make from our analysis of the top performing 10,000 Facebook videos last year, and tips for what you can do to make the most of Facebook video.