How Facebook Algorithms Reduced Reach & Referrals: A Case For Quality

In May 2015 Facebook made a change to their newsfeed algorithm to ‘balance content from friends and pages’. Nobody was to know at the time, but this was the start of a new age of social media and content engagement.

In 2015 Facebook was driving increasingly higher engagement and traffic for publishers, brands, marketers and news outlets. The May 2015 newsfeed adjustment and the many subsequent changes to the Facebook Algorithm, listed below, put this trend into reverse. The chart below from Shareaholic demonstrates very clearly the rise and fall of Facebook as a traffic source for publishers.

This is the story of Facebook’s algorithm changes and the consequences for content marketers.

It’s a story that continues to unfold. The most recent newsfeed changes in 2018, particularly promoting stories from ‘trustworthy’ sources, are changing the dynamics of Facebook reach and engagement again. This report on the Facebook Algorithm from 2015 to the present details the changes and helps readers understand the current marketing context.

This Playbuzz quiz What Country in the World Best Fits Your Personality? had over 8.5m Facebook engagements (likes, shares and comments).

These headlines tease and withhold information from the reader. This Upworthy post 2 People Described The Same Person To A Forensic Artist And This Is What Happened had over 3m Facebook engagements.

The success of these publishers led many others to follow their example and create so-called viral content formats for Facebook. In 2015 Parse.ly reported that for their network (over two thousand publishers) referrals from Facebook surpassed referrals from Google. 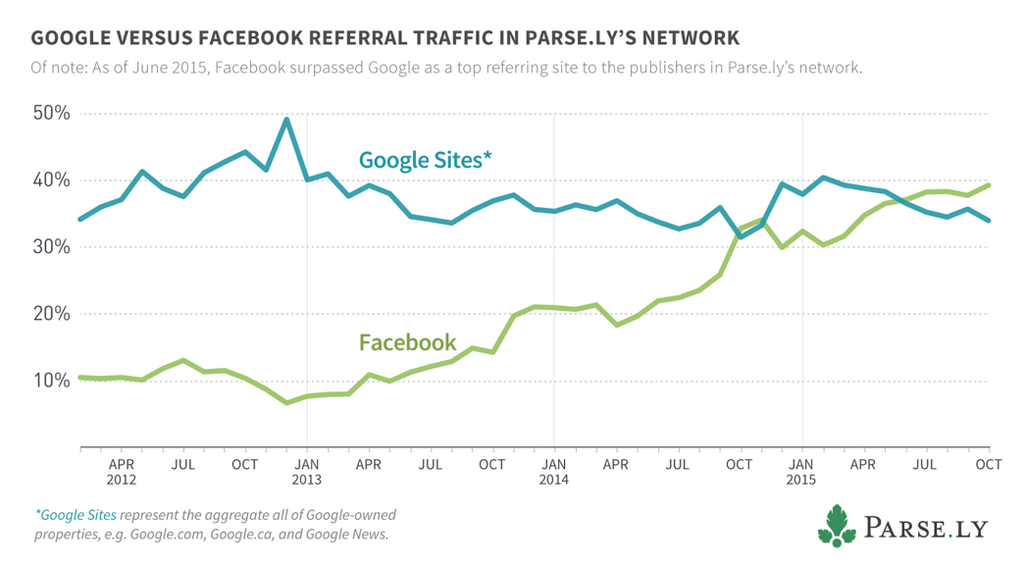 Facebook as an advertising platform has an interest in keeping people on the platform for as long as possible rather than acting as a referral source for publishers. It also wants to be a community platform that promotes discussion and engagement rather than being a repository of viral clickbait content. As such, we could have anticipated the changes that were coming. The announcement of the May 2015 newsfeed change to ‘balance content from pages and friends’ included a warning “in some cases, post reach and referral traffic could potentially decline.” The more cynical commentators argued this was to encourage publishers to pay for promotion of their content.

Moving To The New World: Changes to the Facebook Algorithm

The decline in traffic referrals from the May 2015 change was immediate and significant. Facebook then made a further newsfeed change in June 2016 to ‘help make sure you don’t miss stories from your friends.’ In the announcement, at the very bottom, Facebook again noted “this update may cause reach and referral traffic to decline for some Pages.”

In August 2016 Facebook took aim at clickbait and viral content. They had previously made some newsfeed changes to reduce clickbait content back in 2014. In 2016, they took this further. This round of newsfeed changes was very specific. They targeted two headline types:

The August 2016 newsfeed changes were made to prioritise informative posts. Facebook referenced their Feed Quality Program, global crowd-sourced surveys of tens of thousands of people per day that “look at each story in their feed and rank it on a scale of one to five — one being “really not informative” and five being “really informative.””

This concern with quality content has continued to be reflected in further newsfeed updates including one in May 2017 which lowered content with links to low-quality sites. These included sites “containing little substantive content” as well as sites with disruptive ads, shocking ads or malicious ads. This was reinforced in June 2017 with a change that demoted what Facebook considered to be spammy links to “low-quality content, sensationalism, and misinformation.”

The combination of newsfeed changes over the last three years has changed the profile of referrals to publishers. The latest data from Parse.ly is as follows.

As it stands in June 2018, Facebook referrals have declined and currently, Google is sending almost twice as much traffic to publishers as Facebook.

These changes have hit sites hard that relied on Facebook referrals. The Financial Times has written extensively on the impact. 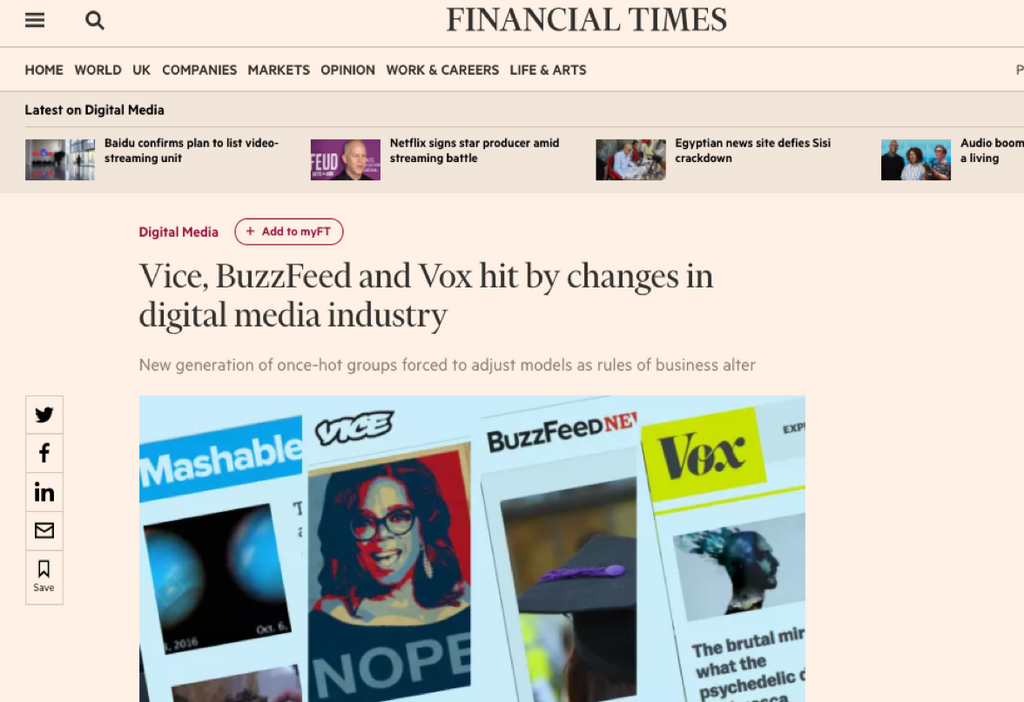 The impact has been far less marked for sites such as the Daily Mail where over 60% of traffic is direct.

In January 2018 Facebook made a series of very significant changes to the newsfeed. The background and context of these changes is important to understand.

There has been a sharp rise in the sharing of partisan political content. It appears that the more partisan the content the more it is shared by that particular political tribe. Often this content appeals to emotions such as anger.

There has also been a rise in non-traditional sources of media. In the case of politics according to Jim Waterson, formerly of BuzzFeed, 9 of the top 20 most shared stories about the U.K. 2017 election were from non-traditional media sources such as the blog Another Angry Voice.

Following the 2016 U.S. Presidential election – and other elections – there has been significant criticism of Facebook for promoting misleading or false stories. Trust in the news in general has fallen, but this is particularly true of news found on social media.

The Reuter’s Institute for the Study of Journalism at Oxford University published its 2018 Digital News Report. This report found:

This is clearly a problem for platforms such as Facebook. The Reuters institute note that “the use of social media for news has started to fall”.

This context explains Facebook’s decision in January 2018 to prioritise news in the newsfeed from “publications that the community rates as trustworthy.” This has had an immediate and significant effect on the reach of content from different publications. There have been complaints from websites to the right of the political spectrum that they have been penalised disproportionately. There is some evidence for this. Rowland Manthorpe in Wired Magazine in May 2018 notes that engagement on right-wing sites has fallen by 29 percent over the last year, whereas daily engagement on left-wing sites has fallen by 9 percent.

The other big change to the newsfeed in 2018, was to encourage meaningful interactions. In essence to promote content that provokes discussion and interactions. Facebook comment that this content might be “a post from a friend seeking advice, a friend asking for recommendations for a trip, or a news article or video prompting lots of discussion.”

They acknowledged that “showing more posts from friends and family and updates that spark conversation means we’ll show less public content, including videos and other posts from publishers or businesses” and “Pages may see their reach, video watch time and referral traffic decrease.”

Whilst overall Facebook engagement with public content has been declining, the recent changes could lead to higher reach and engagement for quality sites that are trusted by Facebook’s community groups. If you want to learn more about these communities, check out our guide on how to use Facebook groups to drive engagement.

I personally think people are more sensitive to sharing content that may be untrue or misleading. People I know shared the following image on Facebook in the run up to the U.S. Presidential election. 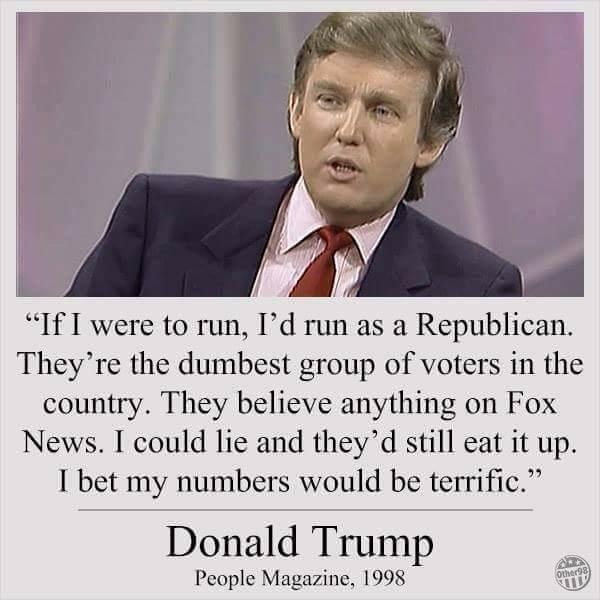 They were subsequently embarrassed to learn this was a made up fake quote. In a world of content overload and fake news people may be more likely to only share content from sites they trust.

It is just a single site, but it is interesting to see Facebook engagement with content from the Financial Times (FT.com) increasing over recent years. 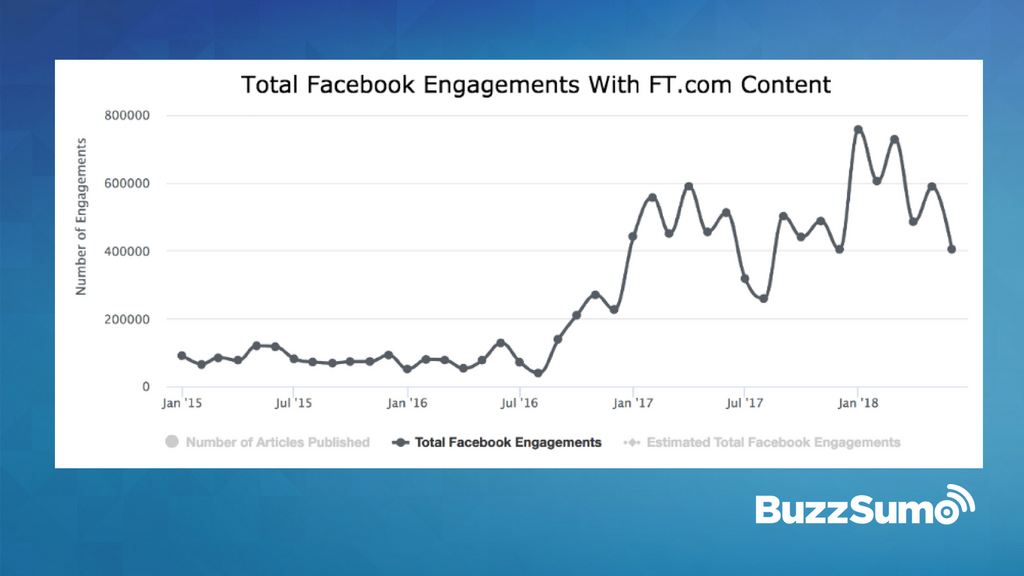 Interestingly we have seen higher engagement with paywall content over the last year, which may again relate to perceptions of quality. Higher social sharing of paywall content is also counter-intuitive although many of the paywalled sites allow a number of free articles each week.

The Financial Times has reported that The New York Times is “more than halfway to its goal of doubling digital sales to $800m by 2020, thanks to surging online subscriptions.” The newspaper now has more than 2.6m digital subscribers and overall subscription revenue passed $1bn for the first time in 2017. Our BuzzSumo data also shows that total social engagements with New York Times content has increased over the last three years.

Social networks, like Google, will continually tweak and change their algorithms. Marketers have to pay close attention to the regular announcements and react accordingly. In simple terms, if Facebook says it will demote content such as ‘what happened?’ headlines or posts that say ‘please share’ then you need to take note.

The old world when viral posts could get millions of Facebook engagements has gone. Viral headlines and content formats are also far less effective than they were three years ago. Headlines that exaggerate or withhold information can actually reduce the reach of your content.

The future of content sharing is quality content and it is essential that you build your authority and reputation as a trusted and informative site.

Social networks such as Facebook are places for engagement and discussion, and are likely to be less useful in future as a source of traffic referrals. Google has established itself as the dominant source for traffic referrals and paying attention to Search Engine Optimisation (SEO) has never been more important.