2020 has been wall-to-wall politics, so you could be forgiven for wanting to take a break from the subject. However, evidence revealed by machine learning models in our first ever content engagement report has shown that mentioning politics in article titles can generate strong engagement. So, how can you put this information into practice?

Most companies tend to put politics to one side, reserving their opinions for the dinner table. Not Ben & Jerry’s. They might be running a business, not a non-profit or political party, but the Vermont founded ice-cream company has a whole section of their website dedicated to their values . It’s not hidden away at the bottom of a footer, but proudly displayed on their main nav.

Once you read through these values, you can see that these aren’t just the generic company values you read time and time again, such as ‘integrity’ or ‘great customer experience’, but values that openly engage with political issues. 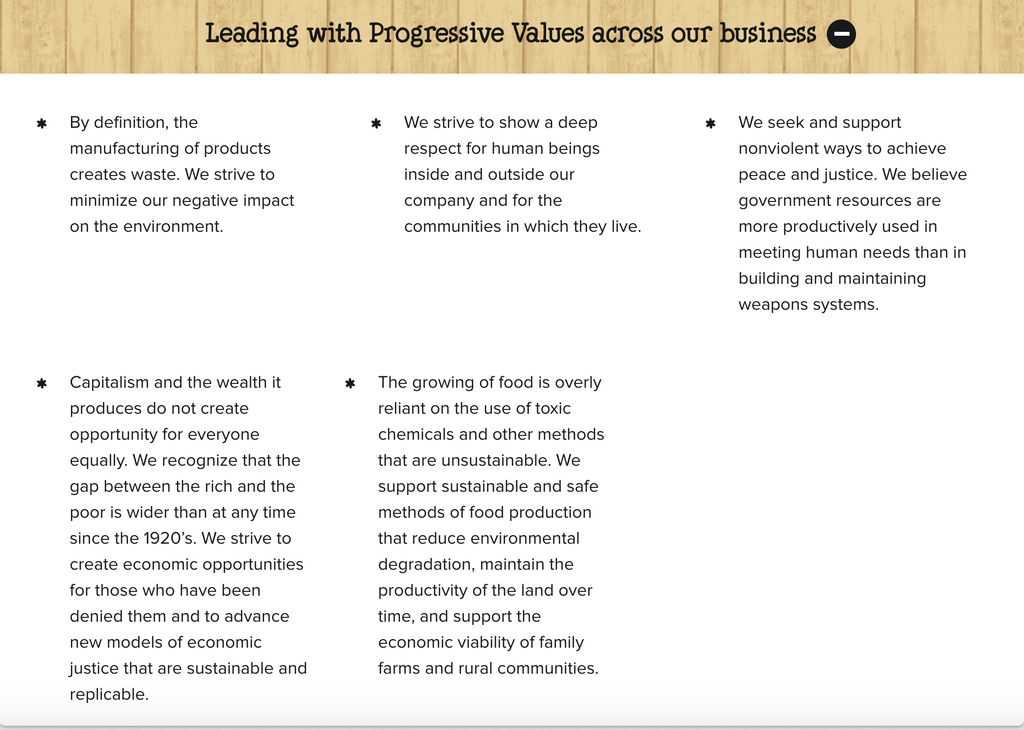 But does shouting about their values in this way pay off? Using BuzzSumo, we can enter their domain URL and take a look at their content over the past year. 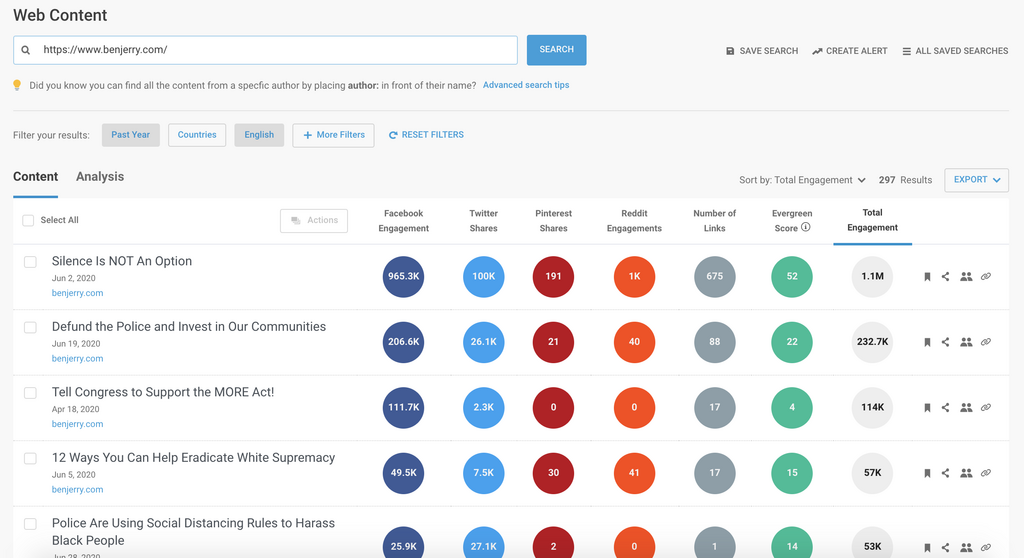 Not a mention of cookie dough or phish food to be seen! You’d be forgiven for thinking that this was the manifesto of a nonprofit or political party instead of a company selling frozen desserts. In fact, articles about ice-cream don’t even make it into any of their top 10 of most engaged with posts this year.

The levels of engagement they’re getting for their political content, on the other hand, is huge. Their top post has had 1.1m total engagements, and they have regularly hit above 50k. The number of links generated are impressive too; the company received 675 backlinks to their Silence is NOT An Option post that boldly stated “We must dismantle white supremacy”.

When comparing Ben & Jerry’s to some of their competitors, in terms of social engagement, no one comes close.

The world famous Häagen-Dazs might have been valued at a sweet $4 billion, but when it comes to content engagement they’ve struggled to get more than a few hundred engagements on their more predictable content.

Founded only 8 years ago, Halo Top might be innovative when it comes to their product, using sweeteners to reduce sugar and calories, but the engagement on their website content isn’t quite so healthy.

Get insight into your competitors' domains

Reveal the engagement secrets behind campaigns run by your competitors and industry leaders with a 30 day free BuzzSumo trial.

Even trendy froyo purveyors Pinkberry have fallen into the unengaging content trap.

In fact, we can compare Ben & Jerry’s against a number of other ice-cream brands and it’s a similar story: Ben & Jerry’s blow them all out of the water.

As one of the most hotly contended elections ever happened this year, more and more companies seem to have spoken out about political issues.

In late October, Expensify’s CEO David Barrett emailed all of their users advocating for Biden’s campaign.

Using BuzzSumo Alerts, we can see that this bold move increased media mentions by 1420% and the conversation has rumbled on since. 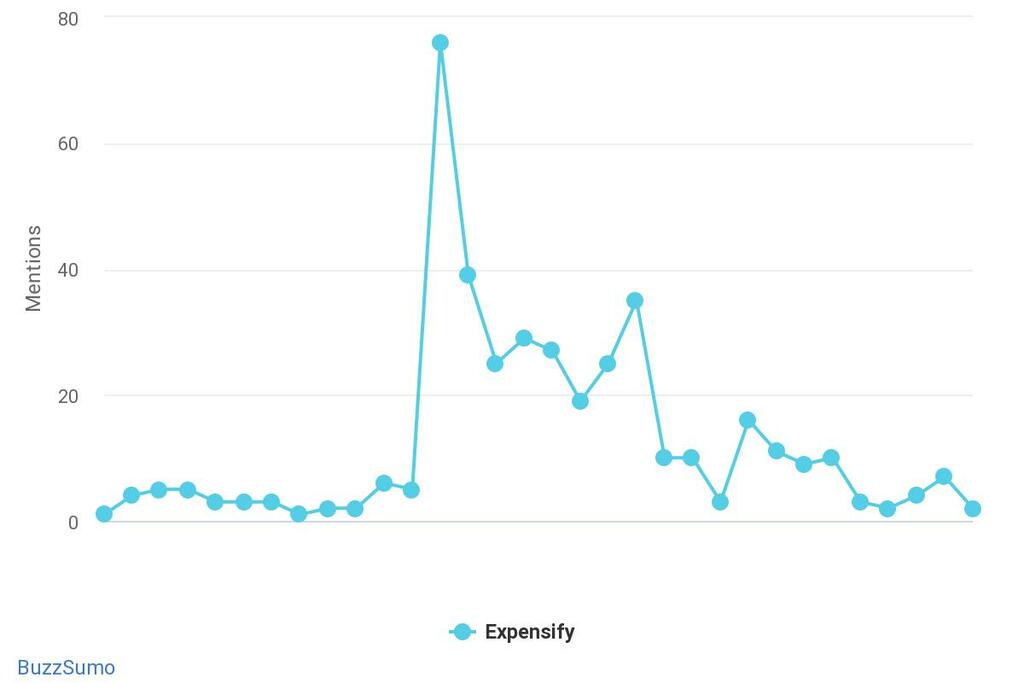 Take one look at your Twitter feed or BuzzSumo’s Trending feeds and you’ll see that politics is everywhere. People are naturally drawn to political topics, which spark passionate discussion and debate. We’re all talking about politics, so it makes sense that if you make a big political statement, people will talk about that too.

And it pays off. Ben & Jerry’s political stance doesn’t only generate huge amounts of social engagement, it undoubtedly contributes to its status as the top selling ice-cream brand in the US. Putting their values front and center has given them a loyal following, both when engaging with their content and buying their products.

Beware: jumping on the political bandwagon without real commitment to the cause is dangerous territory. L’Oreal’s Instagram post that read “Speaking out is worth it” in the wake of Black Lives Matter protests in spring 2020 led to a major backlash, with former representative Munroe Bergdorf accusing them of hypocrisy after the firm dropped Bergdorf in 2017 due to comments the model made on social media in reaction to violence in Charlottesville. L’Oreal have come to terms with Bergdorf, and she has now joined the company’s UK diversity and inclusion advisory board, but many other companies have also fallen into the same trap and received their fair share of criticism.

The success of Ben & Jerry’s politics is hinged on authenticity

For Ben & Jerry’s, their content this year follows on from their long history of supporting many progressive political campaigns, such as Marriage Equality – including releasing limited edition flavors such as Hubby Hubby and Apple-y Ever After – and Climate Justice. Being political isn’t new for them, in fact it’s as much a part of the DNA of Ben & Jerry’s as ice-cream is.

And today, it’s not just their values sitting proudly on the nav – their whole above the fold homepage is dedicated to their statement about wanting America to become an anti-racist country.

If you’re writing political content for your brand, remember:

Trying @benandjerrys for the first time! Thanks for the blm support! ✊🏾 pic.twitter.com/Np7OtWwTLx

The bottom line is that making a political statement can really swing the needle for your brand, but make sure it comes from the heart.

You too can unpick the campaign success of an industry leader by using BuzzSumo. Search using any domain URLs or keyword to understand the full story behind the best headlines. Simply sign up for a 30 day free trial and get access to 6+ billion articles worth of data within minutes.

How We Went Viral: Promoting Content with Influencers, Ads & PR