To improve search rankings for content “it is no longer good enough to concentrate on the number of links or keywords” says the latest SearchMetrics Report, Ranking Factors Study 2014. The study concludes that high quality, relevant content with semantically comprehensive wording is the way to improve your SEO rankings but “the absolute primary focus for content … is quality.”

The report makes for interesting reading and highlights in some detail this year the nature of content that performs well in SEO rankings.  Based on the survey data SearchMetrics argue:

“websites need to produce more content in order to remain competitive in search.”

They go on to say more content needs to meet several quality criteria but relevance is critical. They say “to rank higher, sites must produce not just more content, but more relevant, holistic content.”

The report highlights four content factors that correlate with higher rankings as follows:

The survey argues that content optimization is increasingly a holistic discipline.  Content must be relevant to the topic as a whole and include several related terms. It is simply not enough to rank for one relevant keyword.

Google is focusing on semantics and context. It is getting much better at understanding semantic meaning. The survey gives an example where Google knows it very likely that the word “car“ is relevant in an article in which the word “bumper“ occurs, while this is not true for the term “refrigerator.“  This is called Co-Occurrence analysis.

The survey looks at both “proof terms”and “relevant terms”. Proof terms are terms typically included in all articles on the topic, thus Google expects them to be included. Relevant terms are not always present but part of a sub-topic. In essence context matters.

The survey found that sites with more words in the copy occupied higher search ranking positions and that “sites further down the SERPs have fewer words in their copy.”

This was demonstrated in the chart below, which shows clearly how content length has increased in 2014 and how longer content correlates with better rankings. The Y-axis shows the average number of words, the X-axis shows the Google position. 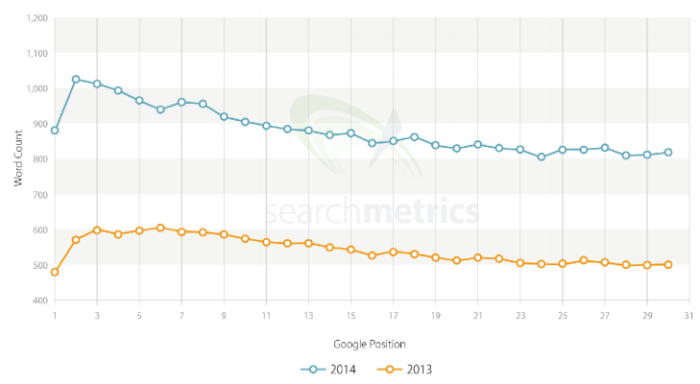 This finding is consistent with BuzzSumo’s analysis of over a million articles where we found a positive correlation between longer form content and social shares. In summary, the longer the content the more is was shared on the four main social networks as shown below. 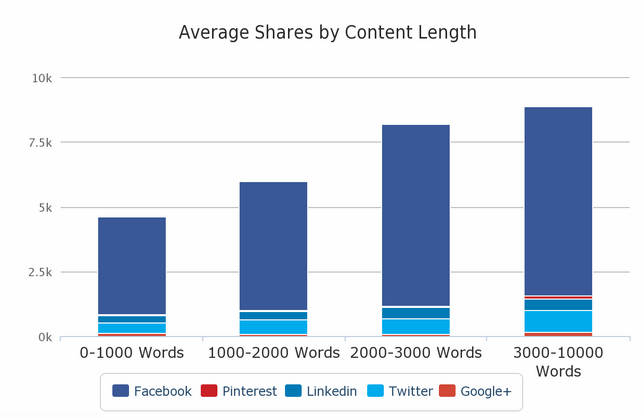 SearchMetrics say “photos and videos not only make text more attractive for users, but for Google”. In summary, the survey found content that is enriched by other media such as images and video correlates positively with higher rankings. This is also consistent with BuzzSumo’s findings, we found that posts with images received twice as many social shares as posts without images.

This year, for the first time, the survey looked at the readability of content and whether it correlated with higher rankings. The survey used the Flesch Formula for Legibility as a basis for readability.  The survey results found that content on higher ranked URLs tends to be easier to read.

The survey found that articles in Google‘s top-ranked positions typically have a very large number of social signals such as Shares, Likes, Comments, +1s and Tweets. However, the survey says “it is important to underline that correlations should not be confused with causal relationships.” Thus whilst social sharing continues to correlate strongly with better rankings there is no evidence they cause higher rankings and Google says it does not currently use such signals. In terms of the networks where there is most correlation “Facebook is ahead of Google, followed by Twitter and Pinterest.” This may reflect the much higher absolute level of Facebook sharing than sharing on other networks.

In summary, whilst social sharing may not cause higher rankings the study does note that “social signals definitely play a role in direct traffic, brand awareness, and the overall online performance of a domain.”

Both the SearchMetrics survey data and the BuzzSumo data would suggest that you can improve your content performance and SEO ranking by focusing on niche edits for backlinks and semantically comprehensive content, long form content, media enriched content and easy to read content.

Whilst the importance of content is increasing in SEO the survey did reinforce the on-going importance of other factors including: