When we looked at 100m Facebook posts we found, not surprisingly, that posts with images got the twice the number of interactions as posts without. So yes, images work but you knew that already. We have also found that list posts gain more shares on average. Again you knew that already. But did you know that one of the most shared forms of content was the picture list post?

It is like rolling three of your favorite superheros into one. They’re the ultimate in efficient, emotionally engaging content – snackable content, enriched with curation and structure.

In this post we take an updated look at why they work and how you can make them work for you.

Why do they work?

People like to share content that is valuable. A New York Times and Latitude research study found five main motivations when it comes to sharing. The number one motivation for sharing was to bring valuable and entertaining content to others. 94% of the respondents said they carefully considered how the information they share will be useful to others.

Picture list posts work because they provide value through a combination of curation, lists and images. It’s a perfect content formula.

Good curators help us by doing the heavy lifting. They research and filter content to provide the reader with just the relevant content though they will often include links for further reading. A good curator also adds value through commentary and context. Curated content is increasingly popular in a busy world, where we are overloaded with content.

The brain processes images much faster than text, studies have shown visuals are processed as much as 60,000 times faster in the brain than text. According to the Visual Teaching Alliance the brain can see images that last for just 13 millisecond and our eyes can register 36,000 visual messages per hour. Try reading that many tweets in the next 60 minutes and see how many you recall. This means we can get the sense of a visual scene in less than 1/10 of a second. This explains why a series of images works so well and why they are used in areas such as learning materials. They work faster than words.

Images have been found to improve learning by up to 400 percent. Stanford University’s Robert E. Horn, argues this is because “visual language has the potential for increasing ‘human bandwidth’—the capacity to take in, comprehend, and more efficiently synthesize large amounts of new information.”

We know that people like list posts, particularly one which is well structured and instantly scannable. In creating a list post such as 7 steps to design a landing page the author adds value by breaking down a task into a series of clear steps. List posts are also tell the reader what to expect for example 5 pictures or 10 tips. There is an expectation that you will gain some valuable nuggets of information rather than a long form essay. This makes them an attractive form of content for the time pressed consumer.

Pictures that tell a Story

The New York Times ran a picture list post on the Women’s March on Washington (January 2017) to highlight the hundreds of marches that also took place across the world. 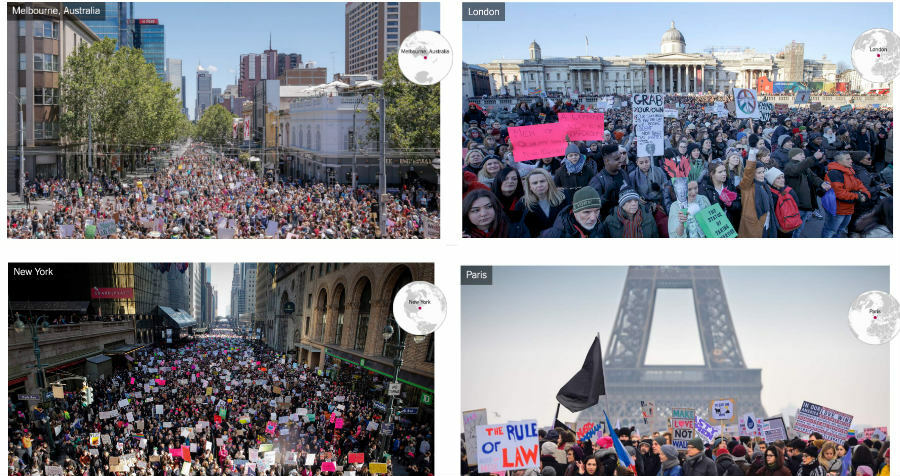 Another example is fathers caring for their children on the refuge trail. This picture list was published by the Huffington Post and received over 90,000 shares.

Stories and the Passing of Time

This picture post shows the photographs that a photographer recreated of his home town some forty years after he took the original photographs. This article received over 450,000 shares and each picture comparison suggests a human story to be explored.

This next post also looked back over 40 years. This New York Times post ‘40 Portraits in 40 Years‘ shows how four sisters took a picture of themselves every year over the last 40 years. This picture post was shared over 660,000 times.

Picture curations can take many forms and Pinterest boards are an obvious example. They also work well as viral posts, the curations can be of amazing images, cute images or amusing images.

The National Geographic are well known for the quality of their pictures and produce many viral picture list posts. Here is an example of cute pictures of rescued baby sloths. These posts appeal to the emotions and was shared over 600,000 times.

A similar post was National Geographic’s ‘10 Most Stunning Wildlife Pictures of the Year‘ which received over 50,000 shares.

A very different form of curation was this picture list post of Overpopulation and Consumption on The Guardian. It is a series of curated images about the impact of overpopulation and was shared over 700,000 times.

A similar picture post is this ‘10 pictures that show what pollution has done to Delhi‘ which was shared over 120,000 times.

Pictures can be used to show many different forms of comparison. Here are some examples.

This article by Bright Side uses NASA images to show how the world is changing over time.

This next picture list compares school meals across the world. It was shared over 540,000 times.

Tutorials and ‘How To’ Posts

A series of images is often key to a tutorial or a ‘how to’ post in order to take a learner through a process step by step. Here are some examples:

How to paint watercolours – this series of image tutorials was shared over 160,000 times.

How to dry nail polish quickly – This series of images was shared over 600,000 times.

Most of the above are business to consumer examples (B2C) but tutorial picture list posts can work equally well in business to business posts. Here is an example from Social Media Examiner on ‘Four Steps To Get Your Business on Snapchat‘. 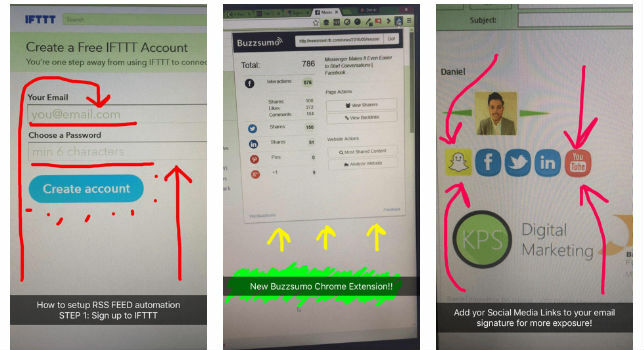 Believer? Great. So now what? Picture list posts are a key content format which have the potential to go viral. Here are some initial questions to help you think about where they may work best in your content strategy.