`
The Journalist Report Everyone Is Talking About ☞

Understand what sets journalists apart from other creators, how likely they are to mention your brand, and how to make your pitch perfect.

How We Created Viral Content with Influencers, Ads & PR

In the first week our post analyzing 100 million headlines was shared over 10,000 times, had over 100,000 views and gained links from over 100 unique domains including Fast Company, Forbes, Inc, Boing Boing and Slate. (We've now updated that study to discover the best headlines in 2021)

Here is our detailed behind the scenes look at how we created our viral content, including:

There is so much content published these days that it is difficult to stand out and get engagement. One way to break through is to create cornerstone content, which is authoritative and referenceable, as part of a ‘less is more’ content strategy. The content can range from comprehensive surveys or lists, to annual reports such as Mary Meeker’s internet trends report. This cornerstone content is what Rand Fishkin calls 10x content. It is so good it demands the attention of your audience.

We were aware that posts about headlines resonated well with our audience. A post we wrote in 2016 on how to write viral headlines gained 3,900 shares and 147 links. A post by Social Media Examiner on headlines also gained over 10,000 shares. We believed there was an opportunity to create a piece of cornerstone content that would be better than the existing content out there.

We therefore decided to undertake a major research project reviewing 100 million headlines in our BuzzSumo database and publish a comprehensive post on the headlines that drive engagement.

You cannot publish content and hope people will find it. You need a promotion strategy.

Derek Thompson’s book ‘The Hit Makers: Why Things Become Popular’ stresses the importance of multiple channels in driving awareness. "Viral content" is never viral in the true sense, where one person tells two people and they each tell two people etc. We therefore planned to drive awareness and traffic through multiple channels as follows:

Here are the details of what we did with the results and lessons we have learned.

On the morning of the post, at 7:00 AM EST, we sent an email to all of 200,000+ BuzzSumo users, including those who had previously signed up to the free trial but were no longer active. The mail is below. 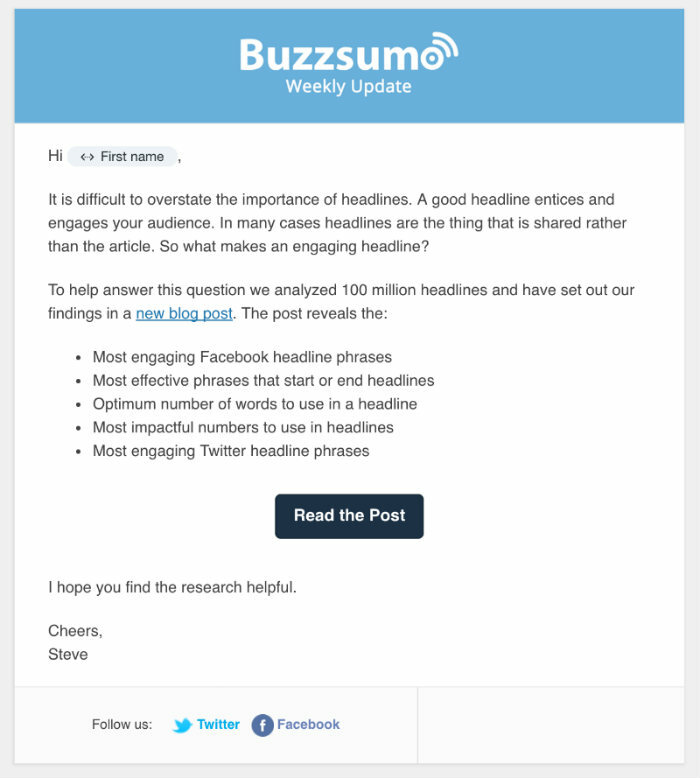 We got a 14% open rate and a click through rate of just over 2%, which drove a lot of our initial direct traffic. Here are the complete stats for the email we sent:

That same morning, we created two Facebook ads: one for publishers and their employees, and one for BuzzSumo users, the majority of which were our freemium users. Below is one of our ads. 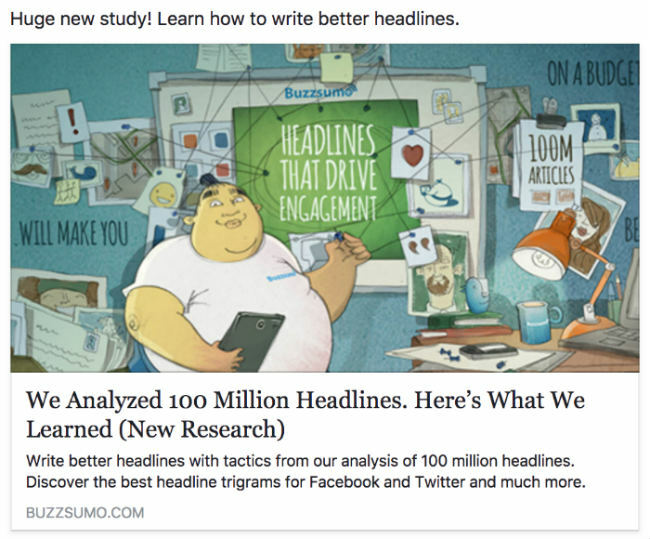 Our first ad targeted employees of big publishers like BuzzFeed, Refinery29, Quartz, and Mashable. Here is a screenshot of our exact Facebook targeting:

The results were as follows:

In summary, we spent $648.00 on Facebook ads that drove over 2,000 clicks and which also resulted in 3 new paying customers. The retargeting of Buzzsumo users was the most effective ad strategy as it resulted in more clicks, but a lower CPC.

By contrast, our Twitter ads targeted at publishers were far less effective, gathering just 29 likes or clicks for an outlay of $151.00. We built a Twitter audience using BuzzSumo’s influencer tool. We searched for Twitter users with publisher handles in their bio (using queries such as @buzzfeed OR @mashable). Our targeted audience only consisted of 15,000 or so twitter users, and was probably too low on reflection.

We contacted a number of leading influencers and journalists about our research before publishing. We asked them what they would like to learn from the study. For example, my colleague Henley’s email with Shan at Nieman Labs prompted us to look at the impact of character length on headlines. Here is the email he sent to Shan a few weeks before we published the post. This feedback prompted us to include more detail on the optimum length of content headlines.

We sent around 20 of these short emails to various journalists, and got a lot of useful feedback and ideas, which we incorporated into our research. We shared the early findings with our influencers and sought their comments and insights. The content influencers we engaged with included Ann Handley, Michael Brenner, Andy Crestodina, Larry Kim, Robert Rose and Heidi Cohen. We included many of their comments in the final post which enriched the post and our research.

A good percentage of our engagement resulted in high-profile placements, and links. For example, we were subsequently written about in Nieman Labs, Inc. Magazine, MarketingProfs, and Forbes. These were the result of influencer/journalist outreach prior to publishing the post.

Engaging with influencers and journalists prior to publishing also helped us validate our idea. All of our emails included the preliminary title of the post (“Analyzing 100 million headlines”). If nobody responded to our emails or questions, that probably meant there was little interest in the idea, and it wasn’t worth pursuing. But in fact, many people responded, and gave us confidence this was a content idea worth writing about.

What happened? The first week

We published the post on a Monday and pushed our multi-channel approach heavily on the first day, namely direct mail, paid ads, social sharing and influencer sharing.

The traffic to our blog during the first week was as follows.

The post got immediate traction on the first day, Monday 26th June, with traffic peaking on day two. In the first three days we can see the social networks driving large volumes of traffic. On day two social traffic was greater than any other source. However, by days four and five social traffic was declining markedly.

One lesson we take away from these results is the importance of publishing your cornerstone content early in the week. From our experience social engagement peaks for just a few days, after which another story or article may take over. Longer term the traffic may come from organic search but initially traffic is more likely to come direct, via social or referrals.

We may have made a mistake in publishing the week before the US 4th July holidays, as this made it difficult to sustain the momentum into the second week.

The advantage of promoting your content in multiple channels is that you maximise the chance of prominent people seeing your content. In our case it was picked up by Kevin Roose of the New York Times whose tweet was retweeted over 600 times. 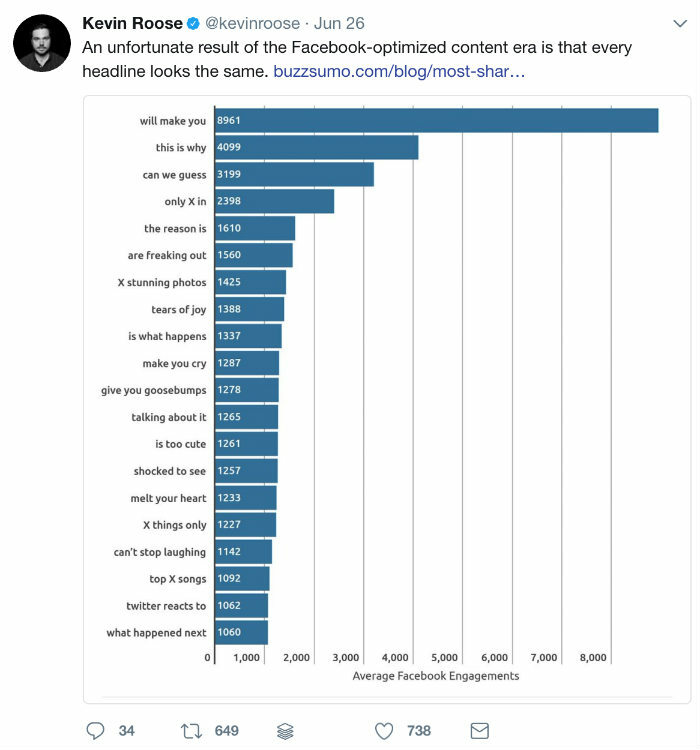 This tweet was picked up by a writer from Slate who contacted me for more information and subsequently wrote up a post on our research.

The post itself also created a challenge for influencers and content writers to create headlines using some of the insights from the research, which many readily accepted, for example.

While social sharing is not correlated to backlinks (we did a study on this), this does demonstrate that social sharing can result in backlinks, especially if it’s shared by the right people.

Other results besides traffic

While the post drove massive amounts of awareness (even from non-marketing communities), there were other benefits we experienced. As mentioned, this post resulted in 3 extra sales, which more than made up the amount we spent on advertising. But we also got a lot of positive feedback from our existing customers, which proves that content marketing can indirectly lead to happier, more enthusiastic customers. Here is an example of a comment we received:

This reply was on a LinkedIn post by Andy Crestodina, one of the influencers we had involved in the post.

We also got invited on to three podcasts to discuss the results of our research.

As we anticipated, most of the traffic to our post in the first week came directly or from social. 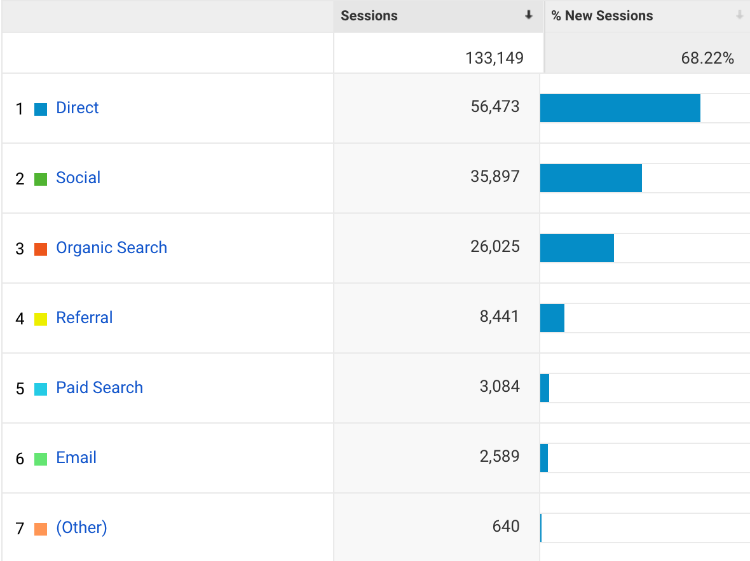 The surprise for many people I think would be how much of our traffic came from Facebook. The traffic from Facebook was significant, three to four times that of other networks as we can see below. 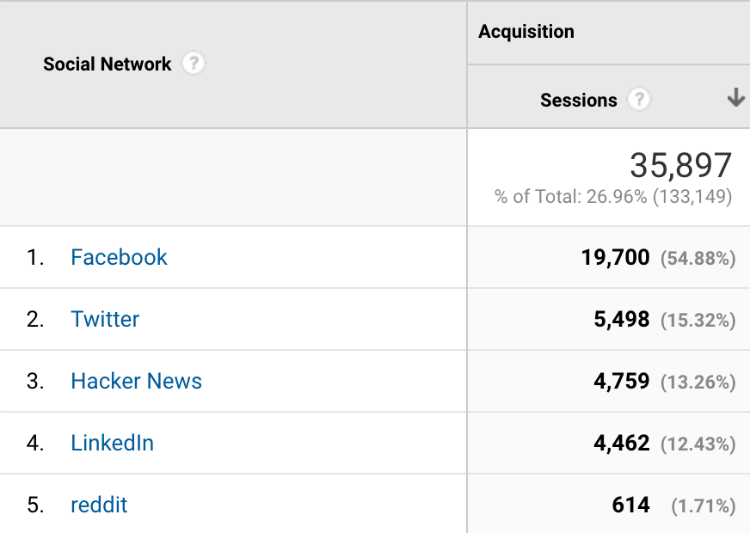 In our experience original research posts are one of the best forms of content to gain backlinks.

In our case the post gained over 2,000 links from more than 100 different domains during the first week. Given how difficult it is to gain links (most content published on the internet doesn’t get a single link), it is very powerful to create content that gains links.

You don’t gain links as fast as you gain social shares. Shares tend to take place quickly as it is easy for people to share content. Linking to content takes longer as people have to write posts where they want to reference your content. In our experience links build more slowly but they have a far greater impact on your content’s authority and longevity. Our link numbers continued to grow over time, and we now have 4k backlinks to that report (as of 2021).

Finally, we anticipated that people would want to reference and reuse our charts. Therefore we made sure our logo was added to each chart along with the link back to the original post to ensure people can find the original research and that we gained maximum exposure. Below is an example of the footer we used on our charts.

Our takeaways from this experience are:

400,000 Articles Analyzed: Here’s What We Learnt About Content Engagement in 2020